Saturday was a fun day for all of us despite the rain that fell. We went downtown to the craft market where the local artisans display and sell their work. The team had a good time shopping and bartering with the salesmen. Scott kept his buying under control this year. J It was fun to see the purchases everyone was making. Most were buying gifts for family and friends back home. We then went out to lunch downtown at a restaurant on the beach by the Indian Ocean. At the end of the meal, a few of the kids went out to walk to the beach on a walkway out into the ocean. It was a great time for photo ops! 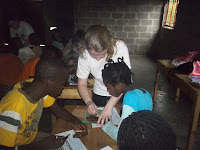 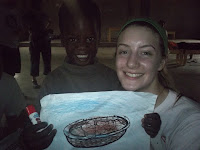 We returned to Iris Matola-Rio to spend the afternoon with the kids.  The team began with singing songs and teaching the kids some fun accompanying motions. Kendal then shared a story about baby Moses with the children. They then went and did a related craft which they all enjoyed.  Michaela displayed her servant’s heart by making sure that everyone had a picture to color and crayons to color with. Haley, PJ and Grace were busy helping children trace and cut their hands out. It was clear that these children have had very limited experience in using scissors. 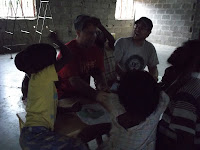 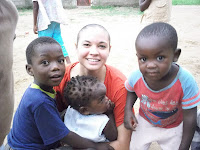 Each child was so proud of the picture they made. The students had a good time helping them color, cut and paste. Tracy Clark was again busy taking photos, Tracy Castelli was busy feeling foreheads and bandaging boo boos, while Scott and Ron were just busy getting the kids all wound up and having fun. 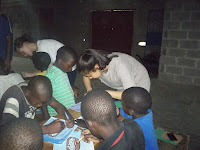 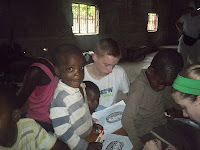 We left the center to head to the Larson’s favorite Mozambican restaurant, Tubiakanga, which specializes in chicken, fried potatoes, and tomato salad. This is an outdoor restaurant close to the guesthouse. We were all happy that the rain had stopped enough to allow us to indulge in this dinner. Again it was a fun time of fellowship. This team is very talkative and is having a great time laughing and experiencing everything together. After dinner, we returned them to the guesthouse to sleep.

When I showed up at the guesthouse on Sunday morning, it was clear that most of the team was feeling quite tired. It seemed that the full days and jet lag were catching up a bit. Yet they were all in good spirits as we loaded into the van to head out to church. We went out to the church that last year’s team built in Chinonquilla. Pastor Berto met us at the church where we joined hands in a large circle and prayed before entering. Worshipping alongside Mozambicans is a privilege. They are not afraid to sing out and dance as they praise God. It is a very joyful time, and it always makes me clap and smile until my hands and cheeks hurt. The first song ended with everyone going around and shaking hands and greeting each other in the name of Jesus. The worship, singing and dancing lasted for more than an hour. We were joined by Augusto Makanana, an educator at the children’s center. He played the drum and boldly led the congregation in many songs. The language spoken and sung was Shongana- the local indigenous dialect.

After worship, Ron Hoch shared a message from Matthew chapter 8 in which Jesus heals a man with leprosy. He reached out and touched this unclean man. Yet instead of becoming unclean Himself, the man was healed. His message was that Jesus cleanses us from all sin. Then it was time for testimonies. Mozambicans love giving speeches and hearing speeches. Several people got up to share, including the local chief. They greeted our team in the name of Jesus and thanked them for coming. They said that one day they could maybe go to America. They spoke of how we did not know each other before this trip, but that through the Holy Spirit we were united as brothers and sisters in Christ. They spoke of how meeting together like this with Mozambicans and westerners worshipping together in church does not happen. They were truly blessed by this team who took time to come and worship with them. Pappa Sitoi (Jim) got up and pointed out the team members he remembered from last year. He was so happy that we were back again. He was a big part of building the church last year and has been at the center helping us build the visitors’ room. Pastor Berto noted that our team brought a guitar with them and asked them to come and sing for them. Ron Hoch accompanied as the team sang two songs (“Lord I Lift Your Name on High” and “Amazing Grace”). Each time, Pastor Berto translated the words after the team sang so the people would know the message of the song. Scott shared his heart with the people. He has really connected in a deep way with them these past two years. He shared that if he is not able to return to see them again here, that he knows he will see them again in heaven one day. He encouraged them and then shared the Gospel message with the congregation saying that our prayer was that each one would know Jesus as their Lord and Savior. They then returned the favor by singing and dancing traditional African worship songs for us. It was a delight to hear these men raise their strong voices in song. The 3 hour service soon ended and the team went outside to play soccer and football with the children while the women finished preparing the meal.

At this point, Tracy Castelli, Emily, and I took Beatriz to the medical clinic. She was feverish, most likely due to malaria, and needed help. It was good we didn’t wait. She did indeed have malaria. When caught and medicated right away, malaria is no worse than having the flu. This meant though that we missed out on the chicken dinner that was prepared by the women at the church site. While we were at the clinic, the team enjoyed chicken, cole slaw, potato salad, rice, and fried potatoes.  From what I heard, everyone ate a lot and ate well. They all enjoyed the meal.

The group then had a few hours to shower and rest up. We had an early dinner at 5:00. The guesthouse prepared a braai for us- braai is Afrikaans for barbeque. We enjoyed a full meal of steak, sausage, beets, potatoes, pumpkin, salad, and ice cream for dessert. At this point, everyone was beginning to realize that they needed some exercise to work off all of today’s food. So a few took a walk while others chose to sit and converse in the dining room. The walkers joined us later and the conversations continued on. We concluded by seeing the team off to their rooms where they planned on spending some time in worship and playing games before heading off to bed.

I hope they don’t stay up too late. Tomorrow it is back to work for them!! We will continue the building project and will also conduct a “Hygiene Day”. We will set up stations in the church. At the first one, they will have their feet washed and then get sized up with a new pair of shoes from the generous amount of donated shoes that were brought over. The girls will then get their nails painted. They will also be fitted with a new pair of uniform pants or shorts for their first day of school on Tuesday. The team will also have another Bible lesson, songs, and crafts for the children to enjoy. Our next three days will be devoted to completing the building project and spending time with the children. The team has really connected with the children. Each member has developed special relationships with the children. It has been a beautiful thing to observe them fall in love with each other like this. They are being blessed by these kids’ love as much as they are blessing the kids.