A Reason to Carry On

Usually my writings are about my work in the communities, but this one is focusing on a very new topic for me…the workers at our company, Sunshine Nut. They really and truly are the main reason Don and I came to Mozambique. We came to provide adults with dignity, hope and opportunity by giving them jobs. Working with people can be hard. They can disappoint you. Sometimes they break your heart. At times, they literally turn on you. It is important that we take the good with the bad, but that we focus on the good. Otherwise, we can lose our hope in humanity.


A few recent glimpses have shown me that our work has not been in vain. They have restored my inspiration, at a time when I really needed to be rejuvenated. Let me share these glimpses with you…

Our employees were recently working A LOT of overtime to get a container filled with cashews and on the water to America. They were working 6 days a week. When it came to crunch time the week before the shipping date, they were even working from 6:00 in the morning to 7:00 in the evening. They were exhausted, but continued to press forward. I joined them in the factory one day to add an extra hand. I was assigned the task of putting labels on the boxes. We always play music in the factory over our speaker system. It adds a jovial air to the work. At any given time, a particular favorite song will come on that livens up everyone. A Mozambican song came on late in the afternoon that caused quite a ruckus as the entire workforce erupted into song and dance at their work stations. It was electric and joyful. This is why we came to Mozambique. We came to provide hope. This moment in time gave me hope too. 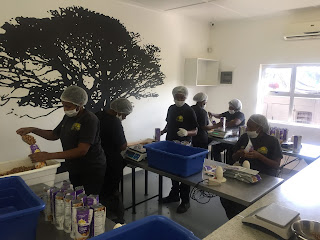 We recently hired 6 new employees from the community. I sat in on the interviews. The candidates who came in were so broken. They could barely look you in the eye. They sat with their heads down and their legs shaking. I thought a few were going to cry. They came wearing their best clothing but still it had tears and stains on it. For most, this was the first job interview they had ever attended. These were people who never had been given anything by anyone. No one ever gave them a uniform to go to school. No one ever gave them medication when they were sick. No one ever offered them sweeties and presents. They came from very poor families where they had to fight to attain anything in their lives. I was in the office last week when one of these new employees came in to fetch her first paycheck…and it was a nice one too because of all the overtime they had worked. We looked out the window as she walked away and saw her break into a dance, waving the paycheck in the air with her head held high. This is exactly why we came to Mozambique.  We came to provide opportunity. This moment in time gave me opportunity too…the chance to see how our efforts have helped others. 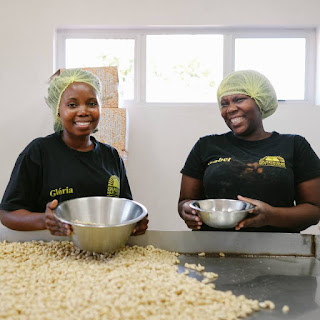 This afternoon I drove into the industrial park where our factory is located. As I came down the road, I passed two groups of our employees who were leaving at the end of the day. They were all dressed up, walking along and laughing together. We exchanged waves and smiles as I passed by. Ahead of me a pair of people caught my eye because they were out on the road. A young man was using his phone to take a photo of a young lady posing so that the industrial park was her background. It was two of our newly hired employees. They were taking photos of each other showing that they worked here in the park. They wanted others to know they had work. Having a job gives people pride and independence. This is why we came to Mozambique. We came to provide dignity.  This moment in time brought me dignity too…I was proud of what we have been able to provide.

Tonight, I am feeling so very thankful. I needed just a nugget of something to incent me to carry on. I got not just one nugget but was spoiled with three. And three is way better than one!
Posted by Terri at 8:04 AM 7 comments: