Our foundation supports a preschool in the Matola-Santos community, located near our factory and home. This preschool is directed by none other than our wonderful Berta. She started the preschool about a year and a half ago. At this time, most of the children in her community project attended school in the morning, so the project children left at her house in the mornings were mostly preschoolers. Therefore, it only made sense to create a preschool for these little ones.

In the beginning, it was lovely. There were only nine children in the preschool. I loved going there to sing, play, and squeeze their chubby little cheeks. 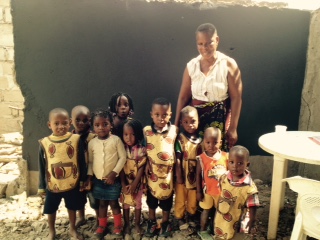 Yet each time I went there, it seemed to me that they were multiplying. Nine turned into 13; 13 turned into 19, and so it continued until one day I stopped to count… I counted 29 children! This is when I had my “less is more” talk with Berta. There was only one teacher for these 29 children. They had nothing available to them. No toys. No books. No crayons. Not even chairs to sit on. These dearies sat and slept on the cement floor of an outside area. I spoke with Berta about how difficult it is for one teacher to meet the needs of 29 two-, three- and four-year olds. Yet Berta would look at me with her sad, puppy dog eyes and say, “But in my heart I cannot say no to them.” She knew that by helping these children, she was helping their parents. She gave the children a safe place to learn, play, and nap while the parents were free to then go out and work to earn much needed money to support their families. So since Berta could not turn any needy child away, I decided I had better help her transform her heart’s desire into a viable solution.

Last January, we covered the cost for her and 4 women who would be her teachers to attend a two-week preschool teacher training workshop. They learned how to manage a classroom and teach a preschool curriculum. We then purchased this curriculum and provided a workbook for each student in the preschool.

Berta then held an official registration for children and before I knew it, she had 4 full classes of children containing 20-25 children in each class. They started their lessons in late January 2016. Throughout this past year, it has been the highlight of my weeks to go and visit this preschool. I enter through the gate to be mauled by 100 children who almost knock me to the ground as they swarm me and wrap themselves around my legs. I make sure to physically connect with each and every child with a kiss, a hug or a touch in some way. Their love and exuberant joy fill me with love and joy as well. Our foundation has helped in many ways this year with many different projects to improve the preschool. I also try to get there as often as possible, not just to garner hugs, but to teach Bible lessons with a craft or to sing a song or tell a story.

We have completed a variety of projects including opening up the rooms by removing the dividing wall, adding a window and a ceiling fan, and painting the walls. Thanks to generous donors, we provided toys, watercolors, pencils, crayons, books...all the things that help the children learn and play.

Fast forward to December 3, 2016. Berta scheduled a graduation ceremony for the five-year-old class. We literally arranged our plane tickets to return back to Mozambique after celebrating Thanksgiving with our family in the US just to attend this special day. It meant everything to Berta. The graduation was to begin at 9:00 am. Almost every event here occurs in what we term “Mozambican Time”. When a time is given, you can count on the fact that nothing will happen until one to two hours later. This happens with workmen who are coming to your house, public events, meetings, and even weddings. I left my house at 8:20 to begin the short drive to Berta’s. At 8:25 I got a call from her asking if I would soon arrive. I found this strange seeing that the graduation was not scheduled to begin until 9. Add in the fact that this is Mozambique. I really believed I had lots of time and could not understand why she was so concerned about how close I was to the preschool. A few minutes later I arrived at Berta’s, parked my car, walked down the short lane to her house, and pulled open the large sliding metal gate to enter her property. I was shocked beyond belief to see before me rows and rows of parents lined up in plastic chairs quietly waiting for the graduation to begin. There was not a seat left! And it was only 8:34!! I sheepishly passed by them to enter into the preschool building. There before me stood two lines of five-year-olds dressed in their finest clothes. Everyone was ready to start…they were all waiting on me!! I did a sweep of the room to locate Berta. At first I did not see her, but then I did a double take. I could hardly recognize her! She was beautifully dressed in a smart white blouse and a capulana that matched with all of her teachers'. Her hair was a new style for her that made her look so fashionable. She had gone all out to look her best. After a quick hug, she shooshed me off to a chair in the audience, and the ceremony began. 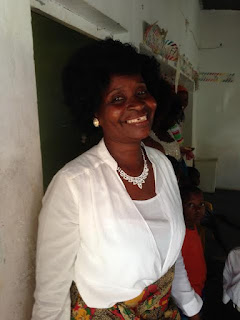 Music blared from the stereo as 25 five-year-olds came marching out with their hands waving in the air. Their teachers, all wearing matching capulanas around their waists, and Berta proudly entered in with them. They assembled before us in two lines- girls in the front and boys in the back. A message was shared with the parents by a young man from Berta’s church. He spoke to the parents about the critical responsibility they have to teach their children in godly ways. This was followed by the children singing the National Anthem of Mozambique. Every day in every school in Mozambique begins the children lining up outside of their classrooms singing the anthem. And this is a good thing too…because Mozambique has to have the longest anthem of all the countries in the world! The children’s singing was of course lovely, but soon, the children from Berta’s project who had gathered to watch joined in, and this was followed by the parents. For me, this was one of those, “I can’t believe I am here in Africa and having this experience” moments. It left me in awe. 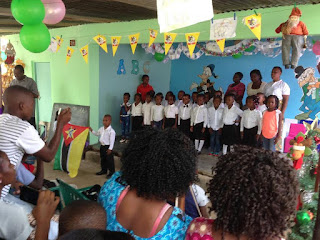 The ceremony continued with a series of activities where the children displayed what they had learned during the past year. Each of the 25 children went to a chalkboard one by one and wrote their name. Each child was rewarded with a round of enthusiastic applause by the assembly of proud of parents. This may not sound like a big deal to us Westerners, but here in Mozambique, it is a BIG thing for a preschooler to know how to write their name. Many children do not complete first grade knowing how to do this. The children continued on with letter and color recognition and even role played occupations they wanted to be when they grew up. As I watched the parents watch their children, I was amused by how many were recording the ceremony with their phones and electronic tablets. We Americans get busted on all the time for viewing our children’s accomplishments through the lens of a camera instead of just sitting and enjoying the moment. Let me tell you…we have nothing over the Mozambicans!! 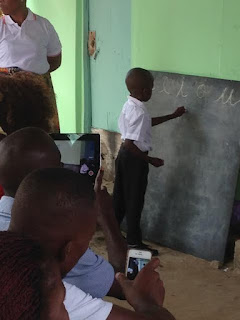 The children then marched back into the building to don their graduation garb. They returned to the performance area wearing caps and gowns. 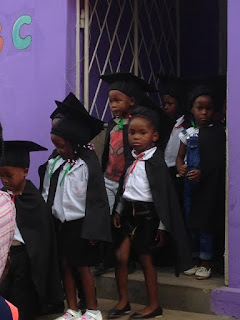 Each child was awarded a diploma and a present bag to mark this special accomplishment in their lives. The ceremony concluded with the usual round of speeches by the director, Berta, the teachers, the cheffe of the area, and by me, the madrinha, or patron, of the preschool. They love their speeches here! The event concluded with a feast of food for the children, who were served at little tables, and their parents, who gathered around the food table and helped themselves to all that was left. 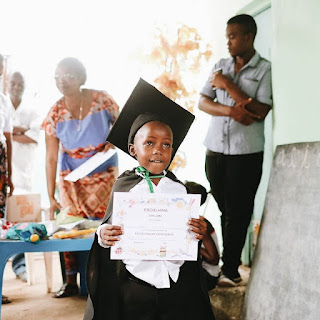 Berta and I stood back and just watched everyone gathering to share a meal and celebrate the accomplishments of their children. We took in the sight before us with a humble pride. What began with nine little ones had grown into this! A lot of sweat, tears, discussions, and efforts had gone into this moment in time. And it felt oh so good to see the fruit of our labor before us.
Posted by Terri at 11:00 AM 3 comments: