Sunshine in the Schools

Part of the privilege we enjoy here in Mozambique is in hosting guests and teams who come from all around the world. They come in all shapes and sizes and for a variety of reasons. It is very overwhelming to host a team both in the preparation before they come (which includes meal planning, food shopping, preparing beds, letters of invite for visas, and getting the necessary governmental authorizations to complete the work they intend to do), in hosting them (which includes providing 3 meals a day, getting them up and transported to where they are working, and reassuring them that if they got bit by a mosquito they will most likely not get malaria), and the clean up after they go (washing up all of those towels and sheets and storing them away for the next group). Yet…each team or guest we have hosted has given us so so so much!

Our guests bring us an ever new outlook on this crazy place in which we live as we get used to things and take them for granted. When we look through their eyes, we see things here in a fresh way. Their fellowship with us brings  lots of good conversations as we get to know each other…they come as strangers and leave as family. They bring with them knowledge in their particular field to share and help people here- it can be construction, medical, dental, educational, ministerial, or simply just loving and playing with the children. They bring us donations that we can use to bless the children and people. The “best” kind of guests bring me Reese’s Mini-Peanut Butter Cups-ha ha!

Visiting here has its challenges. It can be hot. Very hot! We sometimes do not have power to run the air conditioners or fans that keep us cool at night. We sometimes do not get water and therefore one cannot shower or wash clothing. No dishwashers or fancy appliances here, so we all must chip in and share the load of work. There are snakes. There are mosquitos. There are pickpockets. There are many things to be wary about….but nothing to be afraid of. 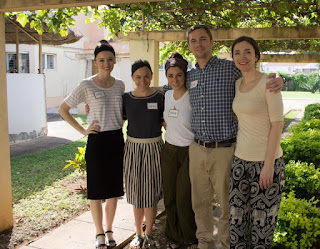 Today we said farewell to a group of amazing teachers, organized and led by our daughter Cassie, who joined us from the Landmark School in Massachusetts. The tears flowed at the airport as we hugged goodbye. I seriously considered ripping up their return tickets and keeping them here with me! The team came to train teachers in some local high schools. This was a pilot program to see how it would go. If a success, Landmark would like to send a team of teachers to us each year. Because it was a pilot program, we decided to work within  the private school arena so as to try it out without having to go through the red tape of working in a public school. We chose three schools- Christian Academy of Mozambique, Anna Mogas Catholic School, and Cantinhou do Ceu Christian School.

Previous to the team’s arrival, I met with the directors of each school several times. First to receive their permission to come and run a training program at their school. We personally know the director of Christian Academy and our William attended school there, so that was the easy one. When I met with the directors of the Portuguese schools, I got the feeling they were thinking to themselves, “Exactly who is this white woman and why is she bothering me?” But they were kind and gracious and agreed to allow us in. I invited them to share with me what their needs were for their teachers and I shared with them the ideas we had- training in classroom management, lesson planning, creative teaching strategies, teacher/student relationship, etc. I also shared with them that we would provide a meal for the teachers…”If you feed them, they will come!” I returned several times to make sure all was set …I was worried they would forget!!

While I was laying the groundwork here, Cassie and her team were busy preparing and organizing a training program. They met multiple times to create the lessons, presentation slides, and assemble the needed materials. Cassie was joined by 4 experienced Landmark teachers- Lauren, Kaleigh, Kate, and Kyle.

The team arrived on a Sunday afternoon just shy of 2 weeks ago. They arrived tired and feeling dirty, but I told them that no one would be sleeping or showering just yet. We came home so they could unpack and freshen up a bit, but we then headed out to play with children at a local orphanage (which is why it made no sense to shower first) and then to eat a traditional Mozambican chicken dinner at our all-time favorite Mozambican restaurant, Tubikanga. My whole purpose in this was to keep them moving and awake until bedtime. They would have no time to relax and adjust to the time change or get over their jet lag. We would have to be up and out the door at 6:30am the next morning to our first day of training. They did great and lasted up to bedtime. In hind sight, they now thank me for having done this. Every one of them did adjust quickly.

Monday morning we completed an all-day inservice training for the 21 teachers at the Christian Academy of Mozmabique (CAM). This was a great start for the team because this is an English speaking school, so there was no need for translation. Our team shared their presentation and were doubly blessed by a capulana service just before lunch in which the teachers sang traditional songs and wrapped each team member in a capulana. At the end of the day, they made speeches and thanked our team. One teacher shared that he had not learning anything new since university…and he has been teaching for 20 years! The teachers again broke into song and dance and presented the team with yet another gift. 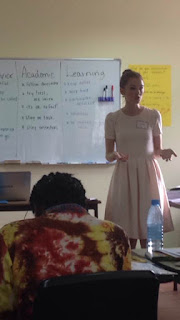 Tuesday morning we returned to CAM. Pairs of or team went into classrooms and taught lessons to model the strategies taught during the inservice the day before. The CAM teachers observed. On Wednesday, our teachers then observed the CAM teachers looking for them to use the strategies. We provided them with feedback as well. I observed a 10th grade Portuguese class. (I must brag a bit here and say that I understood every part of the lesson and instruction. I used to say I spoke equivalent to a 5 year old child, but now I think I can say that I speak more like a high school student!!) I was so excited to see this male teacher put into practice so much of what was taught the day before. It was also exciting to see how the students responded enthusiastically to his new techniques.

Before leaving CAM on Wednesday, Cassie met with the director to plan dates for next year’s trip in March. They were that excited! The director said that the team was so well received because they were experienced teachers who could relate well to her teachers. It was fun to see everyone commiserating together, especially over the funny things that students do during lessons! 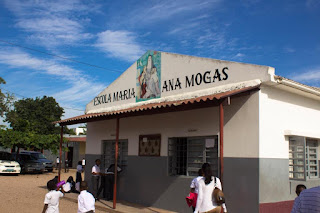 Thursday morning we headed off to Anna Mogas. Everyone was a bit nervous. This would be very new territory for us. We would have to use a translator because this was a Portuguese speaking school. Our Sunshine Nut Company employee, Sebi, was our official translator. She did a fabulous job in relaying the information and also on elaborating when necessary. The students at most Portuguese schools study only half a day and therefore, the teachers only teach half a day. We ran a training program in the morning for the afternoon teachers and one in the afternoon for the morning teachers. There were 37 teachers in attendance. We did this on Thursday and Friday. The teachers were very enthusiastic and received everything that was shared with them.  They also shared a lot with us as well. On the second day that we were there, a teacher told us how much he had benefited from our training. He said that he went back into his classroom that afternoon with new eyes. Another teacher shared that she tried the simple technique of developing relationship with her students by giving each one a “high five” as they entered the classroom. She said she could not believe the difference it made in the atmosphere of her classroom.  In the end, the director invited us to return again next year but this time, he invited us to come spend more time there and run a program like we did at CAM where we would go into the classrooms to model lessons and observe teachers. He said that we are now family. 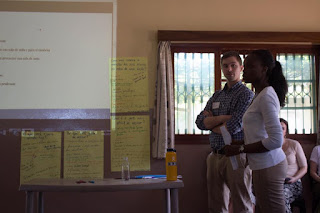 Our final training program was a Saturday morning at Cantinho do Ceu where we presented to 48 teachers. The team was now “on a roll” with their program. They also were more in tune to asking the teachers to share their ideas- this was a big hit and got everyone discussing and sharing. Our main goal was to come alongside the teachers in Mozambique and collaborate. Again, the director was effervescent in his appreciation of the program. He invited us back to not only present again but to do a 3 day program like we did at CAM. When we told him that we would be happy to return in March 2018. He was disappointed that they would have to wait a year and asked if we could return sooner! He said that our team had changed his views on America- that we were a nation of people who were not selfish, who were very helpful, and who want to do good. A teacher at this school thanked the team in front of his colleagues saying that this was the first further training he has received since he graduated from teacher training many years ago. 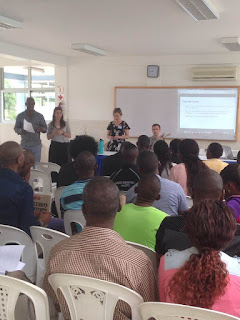 I received the following message from a teacher who attended the training program. It pretty much sums up how very successful this program was…

Hello. I am one of the teachers from CAM. I just wanted to let you know how much the workshop the teachers did was appreciated. I have heard so many positive remarks and more importantly, a couple of teachers said they are changing their ways and seeing results already. One remarked on how positive they (the training team)  were. She said they didn’t tell us what we were doing wrong, but only gave us ideas to use. Just thought you would like to know you made a difference!

SCORE!!!  Looking forward to having you back again next year, Landmark!!! 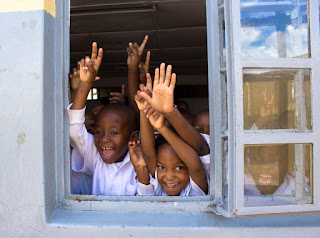