I recently wrote a blog about the industrious women of Mozambique, who make a way to earn money to support their families in whatever way they can (How Does Your Garden Grow). I see these women every day, working in menial and tedious ways while caring for their children at the same time. You do not see a man working alongside them. In fact, very rarely do you see this, if at all. In his book, Half the Sky, Nicholas Kristof states that if you want to transform a country, you do it by investing in the women.

“…when women gain control over spending, less family money is devoted to instant gratification and more for education and starting small businesses.”

Yet I have had the privilege of knowing a few men who do put their families before their own gratification. One of these men is Pedro. He impresses me so very much. So much so, that I decided to write a blog about him to sing his praises. When I asked him for permission, he agreed and added that it would be good because it may encourage others to work as well.

Pedro has a physical handicap that has limited his mobility on the right side of his body. He walks with a staggering limp and his arm is of little use to him. But that does not stop him. On any given day of the week, when you drive through the Matola Santos community, you will see Pedro going from house to house to house with his wheel barrow collecting garbage to take to the dump. The people who make use of his service pay him about 200 meticais, the equivalent of $3 USD, at the end of the month. 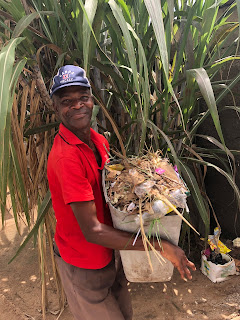 Pedro is a bit of a “nag” in the community. He has a keen eye for little jobs that need done. He asks the residents permission to do these jobs. He has a hoe and will ask them if they would like him to dig a garden. He has a machete and will ask them if he can cut their grass. If the rain has left a gaping hole at the entrance to someone’s house, he will ask if he can fill the dirt back in for them. If he sees someone needs their yard raked or cleared, he offers to do this. All of these manual jobs are trying for an able bodied person, but for Pedro, they are grueling. He works harder that anyone I know. And while he performs useful tasks, the people don’t like being constantly asked. But they tolerate him, and occasionally, pay him to do work.

I recently gave Pedro a ride back to his home in Matola Rio, a good 20 minute car ride away. I wanted to chat with him and get to know him better. He sat next to me in the passenger seat of my car…dirty and smelling of the garbage he had hauled that morning, his clothing embarrassingly tattered, and the soles of his shoes loosely flapping. On our way, he asked me to stop by the market so he could buy some sweet potatoes with the change he had earned that day. Pedro told me that people laugh at him because of the dirty work he does. He said they make fun of him for working for so little money and ask him why he does this. He tells them that he can then buy a bag of rice or a bag of beans, or in this case, a few sweet potatoes…and then, he can eat. Those who make fun of him are not able to make this same claim.

Traveling about on my typical day, I see many capable men sitting around doing nothing. Nothing but waiting for opportunity to come knocking on their door. I admire Pedro. He doesn’t sit and wait, he goes out and knocks on doors and finds opportunity. Others may look down on him because he does the work no one else wants to do. I believe they need to adjust their outlook and see him for the industrious hero that he is. And then, they need to go knock on some doors themselves!