On April 30th, I posted a blog about our fight to save Api’s leg. http://sunshineinafrica.blogspot.com/  I wrote this only a week after he had the surgery on his leg. It was titled, “Frustrations…but all for the good of others”. What a difficult time that was for us. If you read this blog, you know that this was not just a battle to save his physical leg, but a battle to save his life from a curse that was put on him.

Since his surgery, Api has continued to persevere with a brave attitude. He missed a month of school and was forced to leave his active play life behind to sit at home. If he were to get up to move around, he had to use crutches and was not able to put any weight on his leg. He was to take antibiotics, and we filled him with nutrient rich foods and vitamins. He proved to be a very good boy and followed the doctor’s instructions, not to mention he dealt well with us hovering over him. His wound needed to be cleaned and his bandages replaced every other day during this time period. I was only able to care for him for two weeks, at which time I made a trip to the US. During my absence, my co-worker Sebi was amazingly faithful in going to his home every other day to carry on the wound care, as well as take him to the city for doctor check ups.

Today we are pleased to announce that Api has been downgraded to a Band-Aid!!! This Band-Aid is a victory that we are all celebrating. After a year and a half of having his leg bandaged and treated, he now just has a little bit of his wound that needs to heal. I know that many of you have kept him in your prayers, so I wanted to share this victory with you so that you may join in celebrating and praising God with me. 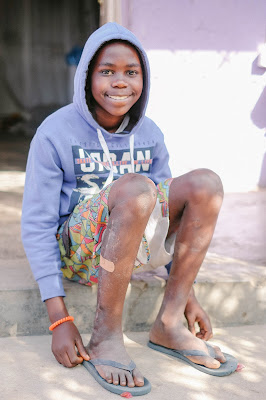