The Spar Boys of Matola

Upon our first visit to Spar, the grocery store in Matola, we were hit up by the “Spar Boys”. These are young boys who live on the streets. During the day, they beg for money to buy food. Meaning well, the first thing Don told me was to not give them money or they would be forever bothering me. As harsh as this sounds, it is true. In most circumstances, by giving to those who beg, you only create a “beggar mentality” in the person, thereby making their situation worse. Yet some of the boys would not just ask me for money, they would ask if I wanted to buy fruit. So I started buying their oranges, pineapples, avocados… whatever was in season at the time. As my Portuguese improved and as I made my purchases, I began talking with them more and more. I learned their names and ages. And I learned that not all of them are living on the street. Several had homes to go back to at night. These boys put on their tattered and dirty clothes and go “to work” each day in the parking lot. They bring in more money if they look the part. Other boys have only the clothes on their backs and no shoes on their feet. You can pick out the true street boys by their thin frames, and they tend to be a little rough around the edges. 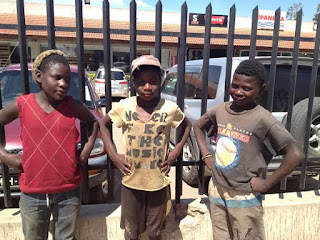 One such boy is Gabriel. He is one of my favorites. He is such a gentleman and always picks me the best of the fruit that he is selling. I always tell him about the angel Gabriel whom God used as His most important messenger. And I always remind him that God has an important purpose for him as well. In the years I have known Gabriel, he has grown from being a skinny little kid to a teenager who is now taking on the shape of the man he will soon become. He is a tough little guy. The streets have hardened him, but there is a kindness and a gentleness to him as well. One day as I was driving down the street, I saw him in his “better clothes” talking with friends. I almost did not recognize him. We both had surprised looks on our faces as we waved in passing. He is one of the lucky ones. He does go to school, and he does have a home to return to at night.

One of my most memorable days with the boys was while I was waiting in my car for someone to run an errand. They came over to say hello to me. They did not ask me for money. They did not ask me to buy fruit. They just came to greet me. There were five of them. I handed Gabriel a 100 meticais bill and told him to go buy an ice cream for each of them. They all ran off with big smiles on their faces. It was a hot day and this would be a special treat for them. As I waited for my friend to return, each of those boys returned to my car one by one to thank me for the ice cream. I was blown away! No one told them to do this. I did not expect them to do this. Yet each one came to thank me. And just as hard to believe is that in my return trips to Spar, they have not taken advantage of my kindness and have never asked me to buy them another ice cream. This tells me a lot about the character of these little guys.

Many of the boys will ask to guard your car while you go in and shop at the store. Here in Mozambique, you always run the risk of returning to a parked car that has had a light or mirror stolen. Often it will be stolen by the boy you turned down to guard your car! I usually tell the boys that my car will be fine, and they know me well enough to leave it alone for me. Also, the money you pay a little boy usually ends up in the hands of an older boy. They create a type of mafia system. The older boys provide protection for the little boys under their care. In return, the little boys, who are cuter and therefore make more money, give the older ones the money they take in.

Yet recently as I got out of my car and was hurrying to make a quick stop at the store, a small boy approached me and asked to guard my car. I gave him my standard, “No my car is fine. I don’t need a guard,” response when something made me stop in my tracks and take a second look at the boy. After hearing my response, he hung his head and turned to walk away. I did not recognize this boy. He was very young, very small… so very small. He seemed so fragile and vulnerable. He was new to the streets. My heartstrings were tugged for this little guy, so I called him back and said, “Yes please do guard my car for me.” His face lit up like I had just given him a million dollars.

I completed my grocery run and returned to my car to deposit my bags inside so I could go to another store to buy a baby gift for a friend. As I came to my car, I spied him sitting on a small tree stump, knees drawn up to his chest, staring directly into the grill of my car. He was intent upon doing his job well. As I approached, he jumped up. I told him to hang on; that I had more shopping to do. I put my bags in the car, locked it up, and went on to Pep (what I think of as the Mozambican version of K-Mart). As I looked for the baby gift, I could not get this little guy out of my head. While standing in line to check out (which here can take forever- no exaggerating), I decided to not just give him a few meticais to pay him. Instead I bought him a bag of candy and a toy car.

I returned to my car to find him sitting in the same intent position. He popped up when he saw me. I began talking with him, asking his name, his age…the usual questions. I asked him where he was from. He was from Baxia- a location in the city that would be a good 40 minute drive away, without traffic. I asked him if he had a home. Yes. Did he have a mother? Yes. Did he have a father? Yes. Did he have brothers and sisters? Yes. I asked him if he thought his mother missed him. Yes. I talked with him about how hard and dangerous life is on the street. I shared with him that God puts us in families to protect us and care for us. I asked him if he thought he would rather be at home. Yes. I gave him money to take a chappa and return home. I gave him the bag with the candy and car in it that I had purchased for him. As I drove away, I wished with all my being that I would never see him again. I prayed that he would return home and that he would be received with open arms and the same welcome that the prodigal son in the Bible received from his father.

This day that I wrote about this experience was quite some time ago now.  I am happy to report that I have seen neither hide nor hair of that little boy! I would like to think that he did heed my advice, that he did return home, and that he is there now in the care of his family.

(Below is my current "Guarda do meu carro", Salvadore. He is 13 years old. His family lives in Marracuene. He tells me that he left home because it was a difficult place to live.  He  hangs out during the day in the store parking lot and sleeps at night on the street at another location nearby in Matola. I really like him- he has a gentle disposition and a good heart. He deserves so much better in life than this.) 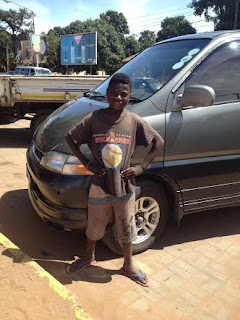