A New Journey for Argentina

At first, I wanted to title this story, “Where There’s a Will, There’s a Way”, but I’ve already used that one. So I came up with, “Worth Waiting For", but I’ve already used that one too. At this point, I realized that we do a lot of waiting around here! That is the nature of life and work in Mozambique. We have learned to be patient and persistent. This is a story of patience and persistence…with the most lovely of endings!

Let me introduce you to the newest member of our growing Sunshine family…7-year-old Argentina. Isn’t she indeed lovely? 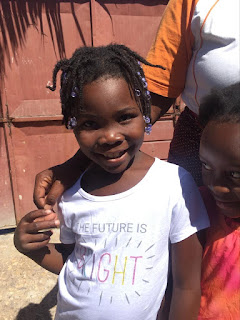 But Argentina’s story is far from lovely. She never even knew her father. He abandoned her and her mother before she was even born, and he later died. Her mother died at some point in her young life, leaving Argentina an orphan. She was in the care of her elderly grandmother, who died mid-year 2019. She had no one left to care for her. She had no family members with the ability to take her in. While we do agree that with family is the best place for children to be, often the case is that the extended family does not have the means to take orphaned children in to live. Argentina went on living with other children in the house of her grandmother. Her Aunt Sara, a good friend of Zelda, the caretaker of our first Sunshine House, told Zelda about Argentina back in September and asked if there was anything we could do to help her. Argentina was suffering. We went to Social Action to pursue placing her in one of our homes. We were beyond disappointed to learn that we were not able to take her in. She lived in the capital city of Maputo. Because it is the capital, it is its own separate district, just like our Washington, D.C. So she was living outside of our area of influence and reach. I found this hard to believe. We had just accepted into one of our homes 3 children from Manhica, which is 2 ½ hours away. Now we were being told that we could not accept this little girl who lived only 20 minutes away? My question to them…So we have to leave her to suffer because of where she lives? The answer…Yes. I determined that this little girl deserved better. I determined to wait it out because she was worth it. I determined to be patient and find a way…And I did!

Zelda’s friend, Sara, is Argentina’s aunt. She therefore has the right as family to take her into her home and care for her now that she was orphaned. This would bring her into our area of influence. All we needed was for Sara, and her husband, to agree. It sounds so simple, but in a developing country it is not. Sara and her husband live below the poverty line. They have barely enough to care for their family, let alone to feed another mouth. After presenting my idea to Zelda, I held my breath in anticipation of their answer. They responded the next day saying they would take Argentina into their home! In fact, Sara went right away to fetch her. In appreciation, we provided food for them so that having Argentina there would not be an added burden to their family.

We waited a bit and returned to Social Action. They went to visit the home of Sara and to meet Argentina. They wanted to leave Argentina in the care of her aunt and uncle. Sara burst into tears. She said they did not have the means to care for her and that her husband would not accept this. This changed their mind and they agreed to move Argentina into our Sunshine House. She will live in the same neighborhood as her Aunt Sara and can visit and play with her cousins freely. It is the best for them all!

We then had to wait a bit more while Social Action prepared the paperwork. This past week we were informed that the paperwork was done and we could move Argentina to her forever home! I was ecstatic and relieved. But most of all, I was so happy for Argentina. She would now have the security and stability she would need to flourish.

Argentina now lives in the care of Guida at our second Sunshine House. She will have all of her needs met- spiritual, physical and emotional. She will attend private school and will one day have the opportunity to further her education at a training school or university of her choice. As her new t-shirt says, her future is bright! She now has an older sister, Cristina, and two sisters who are the same age as her, Virginia and Maura. When she was brought to her new home, all three girls ran and enveloped her in a big group hug. They said that now they have a new friend with which to play.

I was so anxious to meet Argentina but decided it best to give her a day to adjust to her new family and home before the emotional white lady showed up. I went with my husband, Don, the next day…armed with clothing and a stuffed animal to welcome her. I often try to put myself in the place of these children. I wonder what they must be thinking and feeling. But I do not have the mindset to do this. As someone who was privileged to be raised in a secure home where I never wanted for anything and had a mother and father to care for me…how could I ever understand what it is like to be abandoned, orphaned, impoverished and alone?

The other girls at the house met us at the gate. They were excited to show off their new sister. We entered the yard, and a timid Argentina emerged from the house. Her face gave me absolutely no clue as to what was going on inside of her. I introduced my husband and me to her and welcomed her to our family. She politely listened, and gave Papa Don a wave and “Ola” when I asked her to do so. Then that quickly, I was at a loss for words…so I pulled out the stuffed animal. 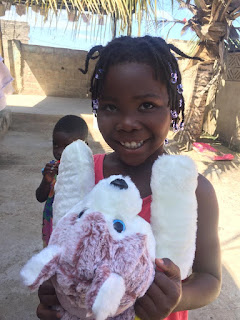 I don’t know what it is about stuffed animals, but they always break the ice. The soft dog brought a broad smile to her face the moment she laid eyes on it. I placed it in her waiting arms and she tucked it in close, wrapped her arms around it, and held onto it. This left me with the parallel picture of her…Argentina brought a smile to our faces upon seeing her. We have tucked her into our Sunshine family, have wrapped our arms around her, and will hold onto her. The waiting now is over...for us both. She was well worth the wait. Our journey together has begun.
Posted by Terri at 6:36 AM No comments: