You may remember my previous blog about Maria… It was entitled, “How Do You Solve a Problem Like Maria?”. (If you want to refresh your memory, you can find it at http://sunshineinafrica.blogspot.com/2016_01_01_archive.html).

Maria was the little girl who at the end of first grade was told by the school system that she was deficient and could not continue on to grade 2. Deficient!! How could anyone tell a 7 year old child that she is deficient? And why did they tell her this? She is unable to speak well and cannot walk well due to a mild case of multiple sclerosis. Since Maria could not return to school, she spent the next 3  years learning alongside the 3, 4, and 5 year olds at Vovo Berta’s preschool. Maria was far from deficient. She could write well and even read a little. But because she was not able to speak or walk well, the public school system cast her aside.

We believed she had potential. We believed she deserved a chance to learn. We believed she could thrive and do well. So our company, Sunshine Nut Company, through our Sunshine Approach Foundation, is sponsoring her to attend primary school at Escola Luz e Vida (Light and Life School). The director of this school is an amazing woman who agreed to give Maria a chance.

Maria has been attending school for the past 5 months. Each month when I go out to the school to pay her tuition, I check in with the director to see how she is doing. The director has told me that she is a sweet girl  who works hard and is doing well. Those are very kind and encouraging words. Yet I was waiting to see concrete proof that she was succeeding.

Upon my return to Mozambique this past week from a trip to the US, my first stop was to go to Berta’s Project and check in on her and the children. As I was leaving Berta’s project, Maria greeted me at the gate with a huge smile. She was so happy to see I was back in Mozambique again. After receiving a long and tight hug, she told me that she had her grades from her first semester of school. I told her to bring them to the community feeding we sponsor the following day and I would take a look at them. If I had known what I would see on her report, I would not have waited!! She brought her report to me the next day. Grades in Mozambique are based on a point system with 20 being the highest value.  A grade of 14 or above is considered above average. Check out her grades (and her photo with her big, beaming, well deserved smile)… 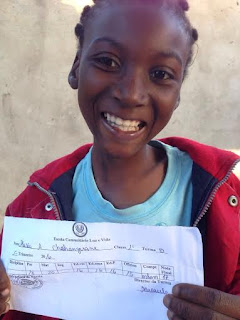 Her final average was…17!!! 17 out of 20!!! Do you even realize how amazing that is?! For a regular, normal child, 17 would be amazing. For Maria, it is out of this world!!! I was overwhelmed and rejoiced with her and her parents as I looked at her report. I just could not believe it. I profusely lavished an incredible amount of praise on her as other children stood in the street watching on, wondering what all the fuss was about. Maria was so proud…unbelievably proud. Everyone was grinning…Maria, her mom, her dad, me, and all the children around us. Today, we are taking her family all the fixings for a celebratory meal...chicken, rice, potatoes, carrots, soft drinks, and a big cake that says "Parabens", Congratulations. We are doing this because this is not just a victory for Maria...it is a victory for her whole family. She could not have done this without them. Her mother and father take her by chapa (public transport) to and from school each day. This a a huge time commitment on their part, and they have been faithful in doing this every day. Therefore, we believe that all deserve to celebrate together.

It is because of people like Maria that we are here in Mozambique. This is why we established the Sunshine Nut Company. We believed that the people of Mozambique deserve hope, opportunity, and dignity. We wanted to transform lives. Our efforts here are challenging, and we go through many days where it feels like we are facing more challenges than we are enjoying successes. Yet today, little Maria brought us immense joy as she showed us that we are transforming lives. The pride in her eyes and the smile on her face and even the way she held her posture straight and tall demonstrated that her life has been transformed. It makes me so very sad to think of what would have happened to Maria if we had not been here to intervene in her life. There are so many more children like Maria who deserve the same chance that she has received. We will continue on and on and on, reaching as many children and adults as we can…and moments like today will fuel us to keep on keeping on.
Posted by Terri at 9:06 AM 12 comments: