The Making of a Sunshine House

When we moved to Mozambique 7 years ago, we assumed that the profits of our Sunshine Nut Company would be used to assist the work being done at existing orphanages. But over the years, our experiences revealed to us that children flourish and are better prepared for a successful adult life when raised in the Mozambican community, in a family environment, and by one full-time caretaker who loves them best of all. Thus the Sunshine House concept was created. We buy a house, fix it up, move in everything a family will need to live, and then place a caretaker (a widow or abandoned woman) with 3-4 orphaned or vulnerable children.

When I was back in the US visiting at my daughter, Cassie’s, house, she got me totally hooked on the TV series Fixer Upper. Well, let me say that Chip and Joanna Gaines have got nothing on me! I would love to see them come to Mozambique and fix up a house for our Sunshine families. Now that would be an episode to watch!

First, we go out into a designated area and look for a house. We have three main requirements…it must have two bedrooms, water, and electric. Sounds like an easy thing to find. Not! I still find it shocking how few families in Mozambican communities have water and electric. Electric and water hook ups are a must for us to purchase a house. We learned the hard way with our first house that one can wait weeks and even months for the water or electric company to come. It is not something we ever want to endure again! 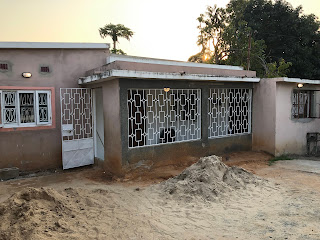 It is at this point that I get to see the house for the first time. Before this, I cannot show my face because I am a foreigner or the price will double. I went to see the house with my colleague, Delcio. We made a list of all that would need to be done before anyone could live there. And then…the work began.

The first job was to replace the broken front door and to add a door for the room that would be the kitchen. Having good solid doors would be a deterrent to burglars. A carpenter was hired for this job as well as to repair the wooden windows that were still usable. Now that our house would be protected, we moved forward. 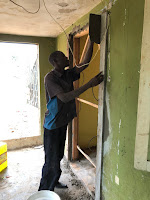 Our house did have electric, but the lines were tacked on the outside of the walls. This is not a safe situation for children. So we hired Alberto, a former Sunshine Nut employee who went to school and studied electrical engineering. His job was to hack channels into the cement walls and to run the lines of wiring to all the lights, outlets, and switches. This is the most destructive part of the process. It is during this time that I stay away because it is so disturbing to see the house literally torn apart. Alberto dug the channels and installed all the wiring in the walls, hung new lights from the ceiling, put in switches on the walls for the lights, new outlets for the plugs, and 4 temporary outdoor lights to provide lighting at night. When he was done, it looked like Armageddon! 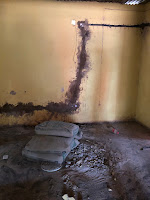 This is when we called in the pedreiro- a mason. He cemented all of the dug out channels in the walls. He also replaced the air vents in each room. 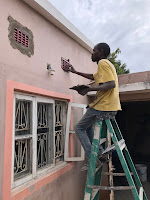 Meanwhile, another pedreiro replastered the back wall of the house, which was decaying, and he put in 4 new metal windows purchased at the local market to replace wooden ones that were rotten. 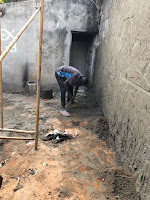 A third pedreiro was hired to make a cement walkway from the front veranda, around the side of the house, and to the bathroom which is located out behind the house.

In came our plumber, Lorinho. Lorinho’s job was to install a sink in the kitchen, connect it to the water supply, and install the tubes to let it drain out into a fossa (a pit) in the front yard. 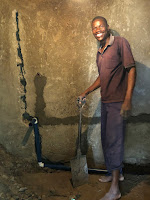 For the fossa, we hired a local man to dig a hole that was as deep as he was tall. The pedreiro was called back in to line it with cement blocks, and we let it sit to dry out before putting on the cement lid. Unfortunately for us, a huge rainstorm caused it to fill again with mud. So it was dug out again and more layers of cement blocks were laid to raise the height of the fossa. 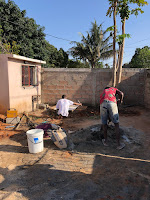 At this point, someone broke in and stole the sink from the bathroom out back as well as the light bulbs from the exposed temporary lighting Alberto had installed. So the plumber was called back in to install a new sink plus replace the totally gross toilet. A good strong lock was installed on the bathroom door and burglar bars on the window. And Alberto came back to install official outdoor lights that were burglar proof. 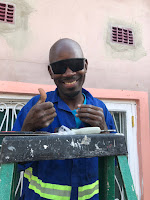 We were now ready for the fun parts! Carlos arrived on the scene and spent a week painting each room. A fresh, bright coat of white paint made all the difference in the world! 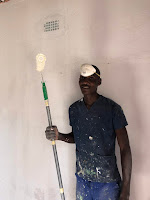 Delcio hung curtain rods and I added the curtains. We were now ready to move in furniture. In came beds, mattresses, mosquito nets, a wicker living room set and TV, table, chairs, stove, and a refrigerator. We added pots, pans, plates, cups, cutlery, bed linens, towels, and a hundred other of those little things you need in a home. 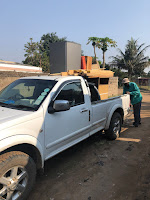 And now comes the best part of all…the people! Just as each of our Sunshine Houses will be unique in the way they look, each house will also be unique in who lives there. Our main focus is on helping needy widows and orphans. Yet we will also have women who have been abandoned by their husbands and have no one to care for them. Zelda, in our first house, is such a woman. 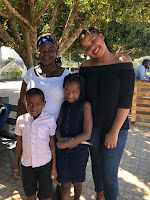 We will also have children who have been abandoned by their parents. Christina and Virginia live at our second Sunshine House because their parents separated, and when their mothers met new husbands, the new man would not accept the children of the previous husband- an all too common occurrence in Mozambique.

We searched for a caretaker for our new third house. We first spoke with a woman named Ilda. Ilda was a widow who had experience working as a caretaker at a children’s center- a definite plus. She was a lovely woman, but she was young (33 years old), strong and capable of finding employment. Our objective is to have a woman who needs someone to come alongside her. Someone who is struggling to survive on her own and has no ability to gain income. We then met with Angelica. We liked her from the moment we laid eyes on her! She had a smile that brightened the day and eyes that were filled with light. Angelica is a 57 year old widow. We shared our expectations with her and then asked her if she had any questions. Her only question was whether she would be able to take the children to church with her…she was hired!!! 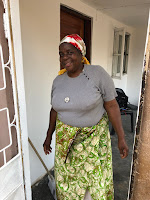 Angelica has moved into the house and is settling in. On the day she moved in, we met to pray so that the home and all who live in it will be blessed. 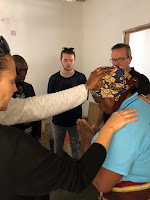 Angelica is getting to know the neighbors and learning where in her area to buy the things she will need. We check in on her each day to make sure she is adjusting well. She is very excited to receive children. This will come next. We are waiting for the final approval to register our foundation with the Ministry of Foreign Affairs. We can then work with the Social Action branch of the government to identify and place orphaned children. We have been told that we will receive this approval in the coming week- a welcome notification after a grueling and frustrating year and a half run-around registration process.

So stay tuned for our big announcement!

BEFORE AND AFTER PHOTOS...