Day 3 - Coming face to face with people who persevere....a trip to the Bocaria.

Our blog for Day 3 actually needs to begin with the night before. My son, William, and I left the guesthouse around 10:30 pm for our 15 minute drive home. We arrived home, pulled through our gate, parked, and got out of the car. Will then went to lock the gate for the night. This is our normal routine at the end of the day. As he approached the gate, two men swung the gate open, entered our property, and the entire family found ourselves faced with an armed robbery which resulted in two of our cars being stolen. Praise be to God that no one in our family was harmed in any way. God was with us and fully protected us from harm. He is good in all things!

Our first concern was for the team. Practically, the next day was their trip to the Bocaria garbage dump. This is an important part of this trip. It is impactful and really places the team members face to face with people who live in the most deplorable conditions possible. Yet these people face daily life with perseverance and determination. However in the world could we get them to Iris Zimpeto, a 45 minute drive away, to go on this outreach without our vehicles? We called the director of the Iris children’s center to tell him we would have to cancel. Yet our son Will kept saying that the team needed to go and that he believed that what happened was the enemy trying to prevent the team from having this life changing experience. I awoke the next morning wondering if indeed Will was right. I racked my brain trying to think of someone who could take the team for us. Into my head popped the names of two of our dearest friends here, Jonny and Becky Wakely. They are former Iris missionaries from England who have been given a vision from God of placing orphaned children into Mozambican families and coming alongside these families to build strong relationships.  I knew they were still seeking God’s will for the implementation of this vision and that they would be relatively “free” to help us. As soon as Don called Jonny, he gladly offered his assistance in not only taking the team for us, but to also pick them up in the afternoon. I met Jonny and the team at the guesthouse where I told the team I would be unable to take them and that Jonny was taking them. I then spoke privately with Tracy Castelli, sharing with her the details of what happened the previous night and why I could not go with them. I knew that together along with the DC administration, they would decide how to best tell the students and their parents about what happened. So the team went on their way with Jonny while Don and I went into town to buy a new van. 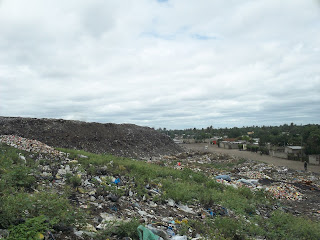 The day looked like it would be a total washout. The skies were gray and rain was falling pretty steadily. Yet I prayed asking God to clear it up for the team and to stop up the rain at 10:00- the time that they would be arriving at the Bocaria. As Don and I drove to town, the skies cleared and the rain did indeed stop. I looked at the clock in our car. It was 10 o’clock. Thank you Lord! You do hear and answer our prayers! The team spent their morning at the Bocaria with the Iris missionaries that lead this outreach. Half the members went up on the dump itself and half went out into the community of homes around the dump. Each group prayed with and shared God’s love with the people there. Then they returned to the Iris church at the dump for a service. (If you would like to read more about the Bocaria, read a previous blog I wrote about my visit there.) They then returned to the Iris Zimpeto children’s center where they had lunch (Mozambican rice and beans) with the children and they had a tour of the center led by hospitality.  By late afternoon, my husband arrived to bring them back to the guesthouse in Matola-Rio in our new van. It was at this time that the rain began to fall again.

I met the team at the guesthouse with a spaghetti dinner. I must admit that I did not know how I would be received or how they would respond to the news of what happened to our family the previous night. I was still trying to process and make sense of it myself. Truthfully, I didn’t even want to go out and see them. I felt so sad that this happened while they were here. I was literally prepared to drop off dinner and hightail it back home again. However, I am so glad I went… and that I stayed. During the day, the chaperones told the student members of the team what had happened to us. The team met us with hugs and concern for me and my family. Their concern was for us and how we were doing. Several shared with me that they now knew why God brought them here- it was to minister to us, to encourage us, and to support us through what happened. After dinner, they wanted to pray for us. We gathered in a circle and held hands while Tracy Clark led us in prayer, bringing our family before the throne of God and leaving us at His feet. Our family was enveloped in His perfect peace and compassion. Tracy Castelli summed it up well when she said that the Larson family is clearly up to something good for the enemy to do this to us. We know this is true. We know that our battle is not against flesh and blood. We know that we have been called here to change lives and to bring hope and a future to many. We know that the enemy does not want to see us succeed in what God has called us to do. This attack against our family occurred on the very day that the equipment for the factory was delivered. This is the very day that the vision God gave Don began to become a reality. We know what we have been called to do and we will not be deterred in seeing it through to completion. The team members “get it”. They are committed to support us and see us through this. God gave them to us, and we love them dearly for standing with us. We look forward to seeing how God is going to also use them in the lives of the children at Iris Matola-Rio in the coming week!
Posted by Terri at 10:14 PM