The team’s first full day in Mozambique began with a hearty breakfast at the guesthouse. I then took them to the Iris Matola-Rio children’s center where they would be spending most of their time while here. When we arrived, everyone was a bit shy. The children were spread about close to their dormitories curiously peering at their visitors. This was very unusual for them. Usually when I go there, they are out on the road and covering my car chanting “Mama Terri” before I even pull through the center’s gate! The team got out of the van and peered right back at them, a bit unsure of how to approach them. I called all of the children to the veranda to be seated so I could introduce the team to them. They sat strangely calm and quiet. They are usually a very rambunctious and noisy group. I shared with the children that the team would be at the center each day working on the room that would be added to Mama Corrie’s house as well as playing with the children. They began to smile. I then told them that the team would have special Bible stories, crafts, songs and games to share with them. Their smiles widened a bit. I finished by sharing that they brought special treats and presents for them also. The smiles broke into full grins. I introduced each team member to them and released them all to begin playing. The children sat still, unsure of what to do. But one by one, they got up and began mingling with the team members. 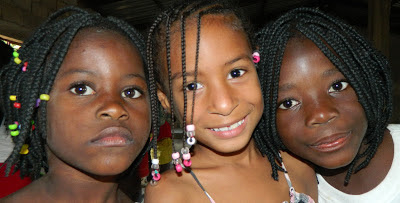 Within an hour, each team member was either playing with or holding children. Meanwhile, Scott Ryle and Ron Hoch got busy working with our team of Mozambicans led by Pastor Berto who were there to help with the building project. They had already begun the work the previous day. They continued adding layer upon layer of cement bricks to the walls that would form the new room. Tracy Clark was busy photographing the children, and Tracy Castelli was bandaging boo-boos and feeling the foreheads of feverish children. By lunchtime, the temperatures had reached at least 100 degrees and the humidity had us all uncomfortably hot, hot, hot. No one complained though, and they kept right on playing, bonding and working. We finished our time there with singing in the church. First Ron led them with his guitar, and then Tracy Castelli moved in with her songs with accompanying motions. 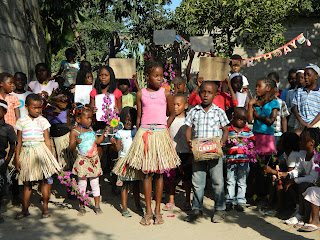 Around 4 pm we went to a project that the woman who works in my house began a year ago. Berta lives in a lower income area. She took note of the children in her neighborhood and recognized a need. Many of the children lived with their elderly grandmothers because their parents had died. These  grandmothers have a difficult time providing for the children, especially in purchasing uniforms and school supplies. She also noticed how many children had nothing to do, and that many would often play in the garbage dump behind her home. So she turned half of her home into a project for them where they come to learn Bible stories, songs, verses, as well as traditional African dances. She teaches them to make crafts- weaving, jewelry, potted plants- that they can then sell for income. We arrived and were greeted by the children who then sang and danced, delighting us all! The highlight of the program was when each member of the team was individually invited up to receive a gift from the children- either a headscarf or a purse (in the case of PJ, it was a “man purse”). A second highlight was when each team member was invited up by a child to dance a traditional African dance with them. Each member was gracious in honoring the children by accepting, even though it was highly embarrassing!! We then presented the children with candies and a toy to thank them for having us.

It was then time to return to the guesthouse for a traditional Afrikaans meal of fetcook (a deep fried bread filled with mince meat) and salad. We were all tired, hot, dirty and sweaty, but no one cared- because we were all in the same boat together with this. After dinner, some members returned to the guesthouse to relax and talk while other chose to go for a late night swim at the guesthouse pool. It was a good day and everyone was ready for bed!
Posted by Terri at 12:29 PM