My birthday present - it's a BOY!

My husband always says how happy he is when birthdays come around here in Mozambique. Life is so simple and uncomplicated for us. There is nothing we want and nothing to buy, even if we wanted it. This is what makes birthdays easy to celebrate. The worries of figuring out what the person would want, where to buy it, how much to spend, wrapping it up, choosing a card… all of this fuss does not exist for us anymore. My birthday just came on January 3rd. We planned a nice evening out to dinner with our son, William, who is visiting from university right now. I knew there would be no presents for me. And while I am fine with that, there is still that little selfish part of me that wants a present even so. I did not receive any presents to unwrap on that day, but God, in His infinite goodness, remembered my birthday with the best present I could ever receive. It didn’t come in a box. It was not bought in a store. It came in the form of a little boy named Samuel. 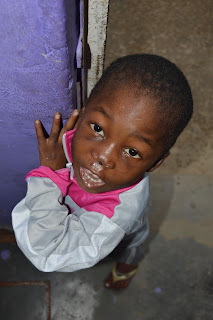 Samuel is just five years of age. His mother died when he was only two years old. His father took on a new wife. What happened next is a sad but all too common scenario here in Mozambique. The stepparent would not accept or care for this child because he is not her biological child. This woman refused to give the child food, did not give him water, and beat him regularly. The neighbor witnessed this and told the woman that she was doing wrong. The neighbor told the stepmother that if she lived in the city, she would have been arrested and taken to jail by the police. But apparently, when this type of situation occurs out in the bush area, nothing is done.

Berta was contacted by this concerned neighbor; she is a member of Berta’s church family. The father had come to the neighbor and asked her if she knew of anyone who would accept the boy to live in their house. He desires to keep this wife more than he desires to keep his own son. The neighbor knows Berta has a heart for children and told her about Samuel.

Samuel had recently been admitted to the hospital due to being severely malnourished. At 5 years of age, he weighed only 9 kilograms, 20 pounds, when he was admitted. He was literally skin and bones. His stomach had stopped digesting food. Thanks to the care he has received in the hospital, he has gained 2 kilograms, but he is still very poor in health. We expressed interest in having Samuel as a Sunshine child, so Berta visited Samuel in the hospital.  She asked the stepmother if she could care for him when he was released. The stepmother agreed. Berta left her with money for phone credit and told her to call her on the day he was released. She asked her to not take him home at all but to take him to the neighbor’s house and Berta would fetch him from there. Berta already heads up our second Sunshine House in caring not just for her own two children, Zaca and Amanda, but also for her abandoned granddaughter, Juju, and the 39 community children in her project. She agreed to take on the full-time care of Samuel as well.

I was so thrilled to learn of this on my birthday. I was elated to receive this special gift who would be part of our Sunshine family. I immediately began praying for this little boy’s physical and emotional healing. Berta had sent me photos of him from the hospital, so I had his little face imprinted in my mind as I prayed. I couldn’t wait to receive the word that he was with Berta in her home and that I could come and meet him. We didn’t know how much longer he would have to stay in the hospital. We were all anxious to get him into our care and to know that he wouldn’t have to return to his previous horrible home life. We worried that the father and stepmother might change their minds and just take him home with them again. Thankfully we didn’t have to wait and worry for long. In just two days, he was released from the hospital, the stepmother did call Berta to come fetch the boy, and she gave Berta all of his documents to take with her.

If I were to tell you that today you were going to meet a 5 year old boy who had just been rescued from living in a home where he suffered from beatings and was deprived of food since he was 2, what would you expect to see? A sad little boy? With a broken spirit? No smiles? Scared? Withdrawn? This is what we expected… yet it was not what we encountered. 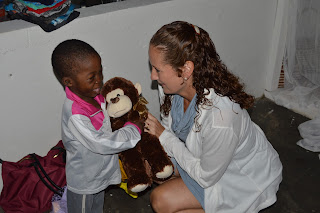 Samuel walked into the room and came directly to me without hesitation. As I bent down to receive him, he nestled right into me like he had always known me. I wanted to scoop him up and snuggle him tight, but I was still a bit concerned he might be scared. So I moved slowly, first just laying my hand on his thin arm, then wrapping my arm around his frail body, and then moving on to pulling him in close and holding him in a tight hug that conveyed he was now in a place where he is loved… all the while thanking God for this special gift and praying for his future. 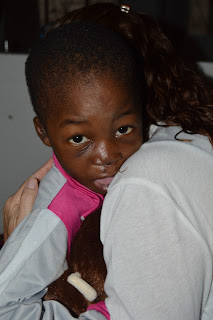 I presented him with a stuffed monkey that I bought for him. He took it and smiled. This smile led to more smiles and these smiles led to laughter! As Don stood by with the camera taking photos, Samuel erupted with giggles, filling us all with great happiness and a wonderment of how a little boy who had been through such suffering could be so joyful. My words in retelling these moments are lacking the depth of what we all felt and experienced. However, the photos that show these moments convey the emotions that meager words cannot.

Don could no longer stand to wait behind a camera capturing the moment. He put the camera down and came over to hug Samuel as well. Samuel treated us to kisses and hugs and love. Samuel cozied up to William, giving him sweet kisses on his cheek. We fell in love with this little boy. Our whole family fell into an awe of the grace of God that is clearly on his life. This little boy now has a future. He will be loved and cared for. He will never again suffer from physical abuse. He is the child of a God that will never leave him or forsake him. He will grow up in a loving environment that offers him dignity, hope and opportunity. He will come into the plan God has for his life. 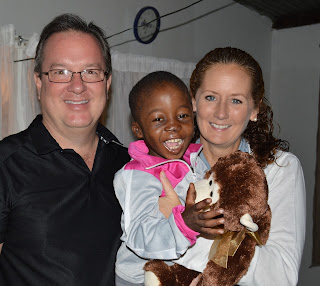 He truly is my best birthday gift ever…one that will keep bringing me joy for many years to come!
Posted by Terri at 8:01 AM