After three years of drought conditions, southern Mozambique is being blessed by lots of rain this year. We are all so thankful for this. Yet my life is not only filled with rain from the skies in the form of water, but it’s raining boys!

In my previous blog, “My Birthday Present- It’s a Boy!”, I wrote about our new little guy Samuel. He is being cared for by Berta in our second Sunshine House along with Juju, who has been abandoned by her parents. He is doing great…eating everything in sight (we had to teach him to not pick up food off the ground and eat it), playing with lots of other children from sun up to sun down, and bringing tons of joy and giggles into our lives. He truly is a picture of God’s grace.

Samuel came to us on my birthday, January 3rd. On that very same day, there were two other boys needing a place to call home and a family, but it was too premature to say anything yet. Now I can! 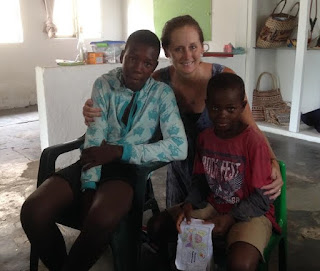 Again, it was a neighbor of these boys who connected with Berta to share their story. Each boy had a different father whom they never knew. The fathers abandoned the mother and their sons when they were infants. Their mother died in April 2016 from Aids. Their older 24 year old brother was left with the responsibility of providing for the boys. He rents a very small, one-room cement home where he lives with his wife and son. He has no job. To make money, he does biscata- the word for odd jobs. He barely earns enough to feed his own family and certainly not enough to feed two more boys. He tried to get help from extended family members, but no one had the conditions to take in more children. My heart breaks to imagine the emotional pain of losing your mother and then not having anywhere to belong…not having anyone willing to accept you into their home and to care for you…not knowing where you will live or how you will survive.

We had already been planning to put together a third Sunshine House. We had a widowed woman named Guida who had agreed to take in and care for children. Guida has worked at Berta’s preschool for the past two years. She is a lovely woman whose husband passed away and her children have grown up and left her behind to pursue their lives.  Guida also has a huge heart for children. In fact, on the morning of the very day that I first heard about Maiquen and Samuel, I had seen Guida. She asked me when we would be able to get the project started. My response to her was, “As soon as we get some children who need a home.” I asked her if she would like boys or girls or any particular aged child. She responded, “Qualquer”, whatever. So all we needed was whatever children God would bring our way. Unbeknownst to us, He had already provided.

I met Maiquen and Samuel for the first time today. They waited quietly for me to finish the community feeding program. I don’t even know at what point they showed up…dishing up food for 200 noisy, squirmy children does keep you pretty occupied! When the dust had settled, I found them in Berta’s Project room sitting in two plastic chairs. I pulled up a chair beside them. I was unsure of how to introduce myself and what to share with them. So I told them our story…how God had called us to leave everything behind and come to Mozambique to help the poor and orphaned. I told them that we would be happy to have them join our family.  I invited Berta to share with the boys. She told them how special they were to have this opportunity and reaffirmed again and again with them that they needed to respect me as well as their new tia, Guida. Guida then spoke a little bit with them telling them that she would care for them and help them to grow in the Lord.

All the while, quietly sitting on the sidelines listening in, was our Cecilia, who is the oldest child living in our first Sunshine House. I asked her if she had anything she wanted to tell the boys. What she shared was so strikingly beautiful. It revealed to us that there is something very special being created in this very large group of widows and children that we refer to as our Sunshine Family. She said that she understood how they felt because she too lost her parents early at a  young age. She told them that I am now their mother and that Don is now their father. She  told them they no longer need to fear or worry because we will be there for them. It was such a tender moment and it made me understand that these children can support each other in a way that I cannot…I don’t know what it is like to lose your parents and to have no where to go. I don’t know what it is like to be turned away by every member of your family. Because these children have gone through similar life circumstances, they will be able to understand and encourage each other. I saw this again a bit later. After our meeting, we were all waiting inside because there was a sudden downpour of rain that kept us from leaving. I went off to another room to talk with Berta. While we were meeting, I saw that Cecilia had pulled up a chair next to the boys and was continuing to talk with them. I pointed it out to Berta. A smile spread across both of our faces as we realized what was occurring.

As I write out this blog, I feel the weight of responsibility on my shoulders. We now have three families to look out for. We have three women and 7 orphaned children who rely on us. We have made a lifelong commitment to them. Our company, Sunshine Nut Co., was created to transform lives and provide hope and a future for those who have been brought low by their circumstances in life. This is a big deal to us and to the people whose lives with which we are involved.  I find comfort in knowing that each one of these women and children were brought to us by God, and He will sustain what He has started. I also take comfort in knowing that I am not alone…I have Zelda, Berta, and Guida, and in fact, they are the ones who will carry the majority of the work. I have the entire staff of Sunshine Nut Co. behind me. And I have you, our consumers…who not only support our work by buying our cashews, but so many of you are our best cheerleaders by spreading the word about the work we are doing.  As it says in Galatians 6:2, “Stoop down and reach out to those who are oppressed. Share their burdens, and so complete Christ’s law.” I see a lot of stooping and sharing of burdens in all of our futures, and I believe we are all ready for this task!
Posted by Terri at 7:48 AM