Xingomana- A Mozambican Experience That Filled My Soul 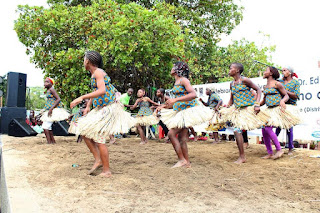 I have moments when I have to pinch myself and ask, “How did a little girl from a small town in the mountains of Pennsylvania end up here?” I feel this way when I have the thrill of an experience that I cannot believe I am privileged to be enjoying. In such moments, my eyes well with tears of indescribable awe, wonder and joy. These moments do not occur on a regular basis, but when they do, they fuel me to go on further. Our recent attendance at a Xingomana dance festival was one of these amazing experiences.

Our friend, Chude Mondlane, is the daughter of Eduardo Mondlane. She put together a festival of Xingomana dance in his birthplace of Nwadjahane to honor him on what would have been his 95th birthday.  Her father was the founding president of the Freelimo Mozambican Liberation Front which was successful in gaining independence for Mozambique from the Portuguese in 1975. Sadly, he never was able to see this day. He killed in 1969 when a bombplanted in a book that was sent to him exploded. At his funeral, the Reverend Edward Hawley said that he “…laid down his life for the truth that man was made for dignity and self-determination.” He is a revered historical figure in the hearts of all Mozambicans.

It has been her dream to put this festival together. In fact, she has worked for several years to do this. She is an artist herself and desires to preserve the art culture of Mozambique before it is lost. Because of her perseverance, this event was the first annual national competition of Xingomana dance- an event that will continue for the years to come. We wanted to support our friend by attending the event, yet Nwadjahane is a long, long drive away. So we got out of bed and left our home at 3 am to arrive in time for the 8:30 start.

Driving on Mozambican roads is an experience in itself. To do so at night goes beyond comprehension, so we said a prayer for protection and headed off. At one point, we passed an overturned truck that left sacks of cement all over the road. Soon after that, we followed a pick-up truck carrying a full load of passengers in its bed when the rear left wheel and axle came off leaving a stream of orange sparks in its path as it struggled to come to a safe stop. We also had the multiple random, but expected, police stops along the way in which they look to make the roads of Mozambique “safe” for all by making sure you have a fire extinguisher, safety vest, relective triangles, and proper documentation in  your car. Never mind that no one pays attention to traffic lights or speed limits, and that stop signs are just a suggestion. We can all drive with the peace of mind that comes from knowing our fellow drivers all have proper safety equipment on board. After about 5 hours of travel, we arrived safely in the village of Nwadjahane.

The small village was teeming with excitement. Villagers were lined up along the dirt road that led to the festival area, ready to greet the incoming government leaders who would be attending. They were singing and dancing as they waited. Others were busy about the stage making final adjustments. Others were filling in around the performance area, securing a good spot to view the teams. Behind the stage stood 12 teams from all over southern Mozambique, dressed in their grass skirts and anxiously awaiting to begin. We found a shaded spot under a large tree in the back, behind the rows of plastic chairs for spectators. To our right, was another stage that was decorated in fabric of red, green, yellow, and black- the colors of the Mozambican flag. Chairs were lined up on stage for the government guests. One large, ornate chair was set front and center, reserved for the governor of the province.

Before long, a stream of trucks came rolling in carrying the special government guests. The villagers erupted into song, the trucks came to a stop, and the government people emerged and shook hands with the crowd. They were led up to the stage where they took their places. We were so proud to see our friend, Chude, sitting right next to the governor of the province with the administrator of Manajacaze on her other side. We know the administrator because of our work there. He is an eloquent man with a good heart. He spied us in the crowd and gave us a smile of recognition and a wave. A few minutes later, his assistant came to us and asked us to join the guests on stage. We were happy to stay out of the way and watch anonymously, but he would not accept our refusal. So up we went and settled ourselves on stage.

The event began with the introduction of the 12 teams who had already won their places in the competition by winning local competitions. Each team danced, sang, and whistled their way out onto the stage with shouts and applause from the audience. The air was electric with as much energy as I have ever experienced at any sporting event. Members of the teams ranged from small girls, maybe around 5 years old, to older women who were gray to moms with babies tied onto their backs. After they returned behind the stage to wait, the speeches began, starting with those is less prominent positions in the government and culminating with the governor. TV cameras and photographers were everywhere recording the event. And finally, the competition began! We were led off the stage to the area below where we sat down to view the dancers.

Xingomana is a cultural dance that goes way back. It was performed by wives for their husband. Historically, and even today, men are permitted to take more than one wife. The first wife is the head of the family. She has prominence over all the other wives. She is the head of the household and tells all the others what to do. The dance is the younger wives’ way of getting her back. Through the dance, they are able to flaunt their younger bodies and gain the attention of the husband.
The dance is done to the rapid beat of drums and the short blowing of whistles. The women are barefooted. Through their firm steps, they kick up the sand around them creating a dust that fills the air. They wear grass skirts that swish back and forth, accentuating their every move. The dance is fast and lively. All of this combines to create a beautiful experience that is thrilling. As we watched, my eyes filled with tears of joy and amazement. They were so amazing. They were so beautiful. And it then hit me…how did it happen that I had the fortune of being here to experience this?! I was a world away, not just in distance, but in culture and experience. It was a sight that few are privileged to see. I felt extremely privileged and overwhelmed by it all.