How often have you heard someone say, “If what I am doing impacts only one person, then I will be happy”? While we often do say such a thing, deep in our hearts, we want to impact not just one person with our efforts but many, many, many more. We are here in Mozambique to transform  lives.

Remember when you were a gangly little first grade student? You were at the start of heading out into the world…climbing those stairs up onto that school bus for the first time, nervously entering a classroom, meeting a teacher and making new friends from outside of your neighborhood. The year passed by quickly, and you put all you  had into pleasing your teacher and doing your best. At the end of the year, you were proud to bring home your report card to show your parents. You felt such accomplishment at being promoted on to Grade 2. You were on your way! But first grade was not a similar positive experience for one little girl. 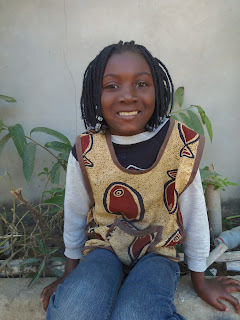 Maria captured my  affection the very first time I saw her at Berta’s project. She has a smile that endears you to her for forever. She is gentle and sweet to her very core. Her small stature makes you think she is younger than her years, which only makes her more captivating. Every time I see Maria, the song from “The Sound of Music” plays in my head, and I often sing to her, “How do you solve a problem like Maria? How do you hold a moon beam in your hand?” This makes us both giggle.

Like every other child her age, Maria attended Grade 1. She is fortunate to live in a complete family with a mother and a father, yet they are very poor. Their only income is the meager amount her father makes selling phone credit on the streets. It was a huge stretch for them to afford the required uniform that would allow her to go to school in their community. The $10 price of this uniform would have been days, if not weeks, of her father’s income. Maria’s year began and progressed the same as any other first grader- she had her first day, she made new friends, she worked hard to please her teacher and do her best work …but her year did not end well. She was told by the school that she was "deficient". That was the exact word they used! And in a country where everyone passes first grade and goes onto second grade, she was told that she may not continue on with her education. The reason…Maria has a speech impediment making it difficult for her to communicate clearly. She is intelligent. She can read. She can write. She can do everything but speak well. For this reason, she was cast aside by the school system.

To keep her from being lost to the streets, Berta has allowed her to attend her project all day for the past three years. This past year, at the age of 10, Maria was a participant in Berta’s preschool program. She came every day and continued her learning alongside the 3, 4 and 5 year olds. Throughout all of this, she never lost her bright smile or her joy. She has now turned 11 years old. Berta realized that keeping her in preschool to infinity and beyond is not helping her and is a burden on her program. She came to me seeking help.

I began looking into possible programs to help students with special needs. None were providing the open door we needed for Maria. They were too far away, and they were too much money for the budget of our newly created foundation. Then a tip from a local children’s center director led us to Escola Luz e Vida (Portuguese for Light and Life School). Escola Luz e Vida is a public school in that it receives funding from the government, but it is private in that the parents pay a small fee for their children to attend. It was started by a Brazilian missionary. While it is not a Christian school, it is run on Christian principles. The director works with the teachers closely and it is a beautiful little campus located not too far away in Matola Rio. The question was…would they accept Maria?
Berta and I took a chance and went out to speak with the director about our Maria. Her first response was that they are not equipped to help special children. As we told her more about Maria, her heart began to soften. Finally, she agreed to allow Maria to attend first grade at the school this year!!!!! Berta and I were elated!!!! 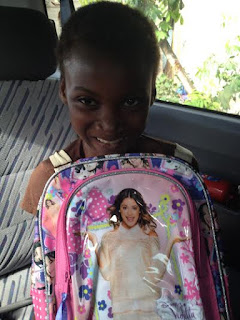 We immediately began the process of enrolling her. Documents from the family and her previous school had to be hunted down, copied and presented. The registration fee was paid.  A “good, hard” talk was held with her parents about their responsibility in getting her to and from this school because it will require two chapa transport rides to get her there. A friend and employee of our Sunshine Nut Company (whose heart is way bigger than her wallet) went out and purchased all of the books and supplies Maria would need, as well as a beautiful pink book bag to put them in.

Then came today… the day that filled my heart. A lot…no…A LOT of work and time has gone into getting this one little girl into this one little school. At times, I wondered if it was too much time to focus on just one child. There are so many other needs that demand my attention. Yet today put that thought to rest, once and for all. I fetched Maria to take her to the school for the first time. She needed to be measured for her uniform. When I arrived, she had a smile on her face that showed how very excited she was. I don’t think it would have been physically possible for her to have stretched her mouth any further! She climbed up into my car, and I presented her with the beautiful book bag and supplies my friend had purchased for her. She was “over the moon”. Never in her life has she ever had such a treasure. We arrived at the school, and she held my  hand as we entered the gate and walked across the sandy play area to the school office. There we met up with the man who would measure her and sew her uniform for her. She was so nervous, yet his kindness eased her nerves. We paid him, thanked him and hit the road to head home again. 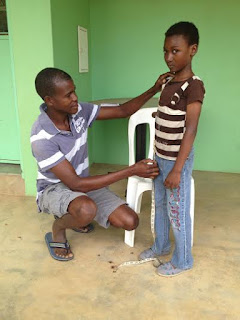 As usual, I am frustrated as I write this blog because my words in relating this experience are lacking the depth and emotion that was felt by us all. Every moment of this journey for this one little girl has been more than worth it. Her life is being transformed before my very eyes. These precious experiences are what makes all we have sacrificed and given up worth it. If we had not come, what would have happened to Maria? What would have happened to the many others whose lives we have been able to touch because of our step of faith as well as the kind and generous support of family and friends. Yes…Don is right…we are here to release the multitudes. And yes…I am also right…we are also here to help the occasional “one” that crosses our path. Whether it be for the many or for the one, we have been called here not to just help but to transform.

I dropped Maria off at home and drove away with a smile on my face that matched hers and a heart that was as full as I hope hers is. Yet today, another song from that “Sound of Music” movie played in my head. The one that says, “So somewhere in my youth or childhood, I must have done something good!” What did I ever do so good to have been so blessed?!
Posted by Terri at 7:03 AM