Desensitization.....I am beginning to think it's impossible. What about you?

"In psychology, desensitization is defined as the diminished emotional responsiveness to a negative or aversive stimulus after repeated exposure to it."  This is how Wikipedia defines desensitization. I believe that this emotional response has been my biggest fear since coming to live in Mozambique. It has been proven that when a person is continually presented with adverse situations, they respond with less and less intensity each time they encounter it. I was so afraid that my constant daily exposure to the poverty and struggle I see here every time I leave my house would desensitize me to it. Not that I would ever stop caring. But that I might begin to not hurt so much for these people that I have grown to love immensely. I am “happy” to report that I daily do have my heart broken by at least one sight or another. But sadly, I must admit that I do not cry as much as I used to. For example, when I first came, every time I left the children’s center, tears would blind me as I headed down that bumpy dirt road back to my home. I could hardly drive! I no longer cry when I leave. This just may be their fault though. How can one be sad when there behind you in the rearview mirror are a dozen kids smiling and laughing as they chase you down the road screaming your name over and over. Yet yesterday I came face to face with, or should I say face to three little precious faces, that left me weeping. I believe their faces will leave you weeping as well. This is their story.

As my faithful blog readers already know, Berta, the woman who works in our home, has a project for 39 children in her community. She saw the needs of the children and was moved to help them. She opened up her home to these children for the half-day when they are not in school. So half of the children come in the morning and half in the afternoon. We all naturally feel badly for orphans in orphanages. But the children we need to worry about are the ones who are still living out in the communities. The children in the orphanages know they will receive three meals a day, a bed to sleep in, a uniform and books so they can go to school, medical care, shoes, and clothing. The children in the communities have no guarantee of anything…ever. Many children have lost one or both parents and have been taken in by an elderly grandparent who no longer works. These grandparents have no income and therefore no means to provide for their grandchildren. Other children are forced to live in abusive homes when one parent dies and the surviving parent remarries. In such cases, most stepparents do not want the children of the former spouse in the home so the children are neglected, abused, and most often abandoned. These are the children Berta helps. She teaches them skills like basket weaving and how to make jewelry or brooms. She gives them bread and tea in the morning and soup for lunch. She teaches them cultural songs and dances. She reads them Bible stories and encourages them to memorize Scripture. Berta takes in 39 children each day, but she could easily take in 390 more…the need is so great. Berta knows her limitations and she keep her number to strictly 39.

About two weeks ago, Berta shared a sad story with me about three children that she had just discovered. Their ages are 12, 6, and 4. Their father died and their mother remarried. The mother got pregnant to the new husband. He told her he did not want this baby and was going to force her to abort the baby. On January 21st of this year, she gave the oldest girl money and told her to take her brother and sister with her to go buy some things at the market. While they were gone, she locked herself in her bedroom and in despair, this mother took her life by hanging herself with a cord in their home. The children came home to an empty house. At first they thought she had gone out for something, so they carried on with their day, waiting for her to return. As hours passed, they became concerned and tried phoning her, but they got no answer. After more waiting, they decided to break down the bedroom door. They did this, and these little children were the ones to first to discover their mother hanging in her room. After her death, the stepfather left, feeling no responsibility whatsoever for his dead wife’s three children. He completely abandoned them. The owner of their house told the children they had to leave because they could not pay rent. The children were taken in by an uncle who already has 9 children of his own to care for. He is not able to provide them with much food and has no money to give them for school uniforms, fees, books and supplies. He is only able to provide them with a safe place to sleep at night.

I listened as Berta shared this story. I saw the pain in her face because she could not help them. She can barely survive herself. My heart was broken for these children. But in all honesty, they were unknown to me…they were just another sad story…another of the many sad stories I hear each day. Like we all do after seeing a commercial on TV about starving children in Africa, I moved on with my day. I did think about them and I would ask Berta about them and how they were doing, but that was all. I had other troublesome issues to deal with already. Until…

Yesterday I took a friend to Berta’s project. My friend is a lovely generous person who gives selflessly to others. She has been wanting for some time to see Berta in action. We arrived at Berta’s and were treated to lots of smiling faces, a song and dance performance, and a tour of Berta’s little home converted to a center (with me now translating for my friend- my Portuguese is coming along!) The children present at the time were the younger group. They go to school in the morning. The older children go in the afternoon. I did notice one beautiful young girl with gorgeous long braids wearing a secondary school uniform. I found it odd to see her there at this time of day but did not think much of it. After Berta showed my new friend all around her center, she told us she would like us to meet 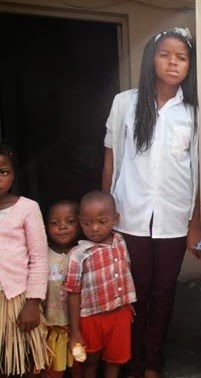 someone. She brought over this girl along with a little boy and a little girl. She then asked me to translate their story to my friend. She began retelling the story she had told me just two weeks before. The one I just shared with you. As she began telling it to my friend, big tears began to roll down the older girl’s cheeks. The little boy reached up to be held by his big sister. She complied and he buried his face in her neck. The little girl turned and hid her face against her big sister. I quickly realized that these children did not need to stand by and hear their story told aloud to a stranger. I told Berta that I would just tell it to my friend in English. My friend cried. I cried. Berta cried. And the children continued to cry.  It was heart wrenching to stand with these precious gifts that had been carelessly and thoughtlessly cast aside like they had no value. It is one thing to hear a story. It is another thing entirely to hold the story in your arms and cry with it. My friend did exactly what I know her to do…she immediately asked what she could do to help these children. Berta shared that the oldest girl was 12 and in grade 8. She needed money to buy books for school. Children in Mozambique receive a free public education, but when they advance to grade 8, which is the first year of secondary school here, they must buy their own books and pay fees. This girl had a uniform but she needed 2,400 meticais (about $80 USD) for books- an amount that is close to the average monthly income of people here in Mozambique. The smallest child did not go to school and had no needs, but the six year old did need a book bag and some supplies. My friend had received money from a friend in her home country of Australia to use to help others here. She pulled out the full amount that was needed and passed it on, along with another hug. The young girl now would be able to go buy her books at the markets in Baixa on Saturday and she will be able to start attending classes again on Monday. For the time being, she can continue on. It should have been a very joyful moment, but there was just so much sadness in the air.

We finished out our time at Berta’s and left to go home. The children waved profusely and smiled as we left. But I did see three children standing in the midst of this happy group that were not smiling or waving. They simply watched us go. Since I left, I have not been able to get their faces out of my mind. I have cried every time they come to the forefront of my thoughts. They now can go to school. The oldest girl gets up every morning at 4 am so she can leave the house by 5am to walk 1 ½ hours to arrive at school in time for the 6:30 start. She cannot afford to pay 25 cents to take public transport. These children will need so much more than books and a bookbag to survive. And I can’t stop thinking about the fact that they will never have a mom or a dad to love on them and support them. I wish I could bring you here myself and let you see their faces and hug them. It would make a difference for you. I know, because it made a difference for me.

The problem is that the sad story of these three children is repeated again and again and again here. When my parents recently visited here with me, my dad’s parting words were, “I am going to go home and tell people about what I saw. I am going to show people pictures of what I experienced, but they will not get it. You have to be here to get it.” This is so true. You can’t just read an article, see a statistic, or watch a commercial on TV and understand the suffering people experience. You have to walk it out with them. You have to see their faces. You have to hold them in your arms. You have to wipe their tears, and sometimes their runny noses too. Only then can you begin to know the Father’s heart for them. I recently read that the Bible has over 2,000 references to caring for the widowed, poor, and orphaned.  God has a heart for the poor, so shouldn’t we have one too?
Posted by Terri at 10:14 AM