Each day, we can never know what is in store for us; what types of experiences will come our way. How often have you gone out on a regular day and seen something unexpected and wished you had a camera there to capture it? Our cameras are never around when we need them the most. Yesterday I had such an experience in a most unexpected place.

I was asked to take a friend to catch a bus to South Africa. She arrived at my house around 6:30 am so we could go wait in the parking lot for her 7 am departure. Africa being what it is, the bus arrived about an hour late. We waited in my car and passed the time with conversation and people watching. We began to notice more and more elderly people arriving to our right. They sat down on the sidewalk outside in numbers that grew by the minute until about 40 people filled the space. 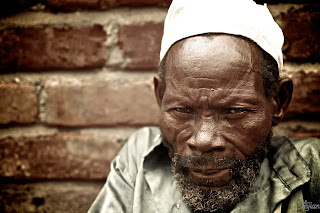 There is something that I just love about older people. They carry such a dignity to them. They have such a history behind them. They have stories to tell and experiences to share. I especially admire the elderly here in Mozambique. The average life expectancy in this country is 40 years of age. If this were true for us in the US, most of us reading this blog would not be alive right now, and I would not be here writing it either.  People who make it to senior citizen status in Mozambique are revered, as they should be. Imagine the stories these people have to tell! They have lived through their country’s rise to independence from colonialism, they have lived under both communism and democracy, and they have endured a 17 year long civil war followed by severe flooding- both of which ravaged the land. They have experienced all of this hardship as well as their own personal struggles to survive in this third world country.

They were all so content. They came using walking sticks for support. The upper part of these brown sticks were worn smooth and white from years of use.  Some struggled just to step up the curb to get on the sidewalk. Others had no shoes and came barefooted. A woman came leading a blind man who used a white-tipped walking cane. Women carried bundles on their backs, tied up with capulanas. The majority of people by far were women. Only a few men were in this group. They sat and patiently waited, conversing amiably with one another. One older man caught our attention. He had such a friendly face and seemed so gentle and kind. There was something about him that made you want to go up and hug him. Another old man arrived in wearing a blue suit jacket. It was old, worn, and showed the wear of many, many years, but we were touched by his desire to look his best for this outing. The women were all wearing the traditional capulanas. They were a beautiful tapestry of colors and patterns.

Then the gate near them began to open. They stood and made a line. A young Muslim girl wearing a beautifully ornate head dress began to pass out bread. One at a time, they filed by accepting a small roll from her hand.  The young girl did not smile at them or speak to them. Her face was passive as she went through this duty her family had left to her to complete. As the people passed through, they then began to form another line on the opposite side of the door. We later discovered this was to file through a second time for the extras. We marveled at the generosity of this Muslim family, who clearly have done this every Friday for some time. We marveled at the sadness of a people, who would be so desperate for a small piece of bread that they would wake up early and walk who knows how far to sit and wait to receive it. We marveled at the discipline of a people of faith, who so obediently carry out the command we all have received to care for the poor. And it made us question how obedient we are to this same command.

As they filed through, a woman wearing a capulana decorated with bunches of grapes arrived late. I vividly remember her because I intently began to watch to make sure she at least got one roll. The first handouts had already been completed, so she took her place about two-thirds of the way back in the line of people waiting to receive a second roll. I kept my eyes directed on her as person after person received their second roll.  I prayed asking God to make sure that these extras lasted long enough for her to receive a bread. And she did! In fact, she received the very last of the rolls! Thank you Jesus! There is always enough!

After the bread supply was depleted, the people filed off, down the sidewalk, and around the corner. I had already been told that on Fridays, Muslims are required share a portion of their earnings with the poor.  This is why you often see old women begging for money out on the corners at the street lights on Fridays. I don’t know if this is true everywhere, but it is here. Amy told me that the elderly go from place to place on Friday accepting these gifts. A butchery near our old house prepares little bags of meat and passes them out every Friday. Another place passes out vegetables, and another may pass out fruit.

So now I am left with how to process this and what to do about it. I see need here every day. Most times I am overwhelmed by the extent of need there is. It is more than a person could fill in a lifetime, and it can make me feel so small and inadequate. Each day I see people begging, people wearing dirty, tattered clothing and going without shoes, and people just sitting with despair written all over their faces. But then I remember that I serve a big God who owns the cattle on a thousand hills. I remember that Jesus said, “Blessed are the poor, for they shall inherit the kingdom of God.” And I remember that, as Heidi Baker teaches, Jesus died that there would always be enough. And I am blessed by so many of you who have given to the people here, some of you who have not even visited here! I realize that if we all do a little bit…whether it be passing out a small roll to a hungry person, sending money to buy pillows for children to lay their heads on at night, donating shoes,  sacrificing our time and comfort to come and play with orphans or build a church…together we can make a difference. Together we can be the hands and feet of our Father.
Through our actions we can show His love for His people and let them know He sees and He cares.
Posted by Terri at 7:41 AM