It's HOT, but so incredibly cool at the same time!

Where to begin?  The past two days have been so full.  The kids on Team 1 have been amazing in numerous ways.  All of them have worked selflessly in the hot sun to complete the foundation for the church.  No offense to Team 2 who will be here next week, but this is by far the most difficult part of the building process.  In fact just this morning, our caretaker, Alberto, suggested we bring over the team from Zimpeto to work today.  He felt Team 1 deserved a break and that Team 2 should have a taste of the enormous physical effort required in this phase of building.  Next week, Team 2 will construct the walls from large reeds called kanisso.  The work is intricate but not demanding.
After digging the 2 foot deep trench that outlined the foundation on Tuesday, they then proceeded to lay the cement blocks on Wednesday.  This meant mixing the cement for the mortar by hand by mixing water, sand, and cement together.  This then had to be shoveled into a wheelbarrow and wheeled over to the site.  Might I also add that the wheelbarrows here do not have the nice plump front tires that the ones in America have.  They are very difficult to push.  Building the base wall took the whole day.  The cement was then shoveled onto and in between the blocks to hold them fast.  During all of this, Mrs. Castelli is very attentive to everyone’s needs- filling water bottles and encouraging those who look a little red to apply more sunscreen.


It has been so impressive to see the patience the Mozambican men have for teaching the students how to do this work.  They were kindly asked to allow the students to do most of the work.  They truly must be using out of this world self-control to not step in and take over as they watch us putz along at a pace far slower than what they would be able to follow.  I watched as Ailon volunteered to be the first one to apply the cement that would hold the blocks together. 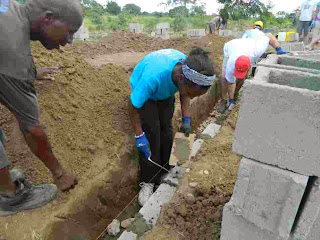 She was helped by a man whom Scott has affectionately renamed Jim.  He could have done the job himself with little effort and much more quickly, yet he handed her the spade, watched her and corrected her, and coached her from the side until she had mastered it.  He then did this same thing with Katelyn and Grace who wanted to take a turn next.  Tools are limited so these girls figured out that they could also do this work by scooping out the cement by hand and pushing it down between the blocks with their fingers. This shows how motivated they are to be involved and working.
We left the site in the late afternoon and enjoyed burgers braiied (the African term for “grilled”) by Mr. Ryle.  We then went to a children’s prayer service at Iris Matola-Rio.  One has not fully worshipped until one has done so in an African church.  There are no instruments other than the voices of the people and a drum.  The singing is soulful and full of joy and it is accompanied by lots of energetic dancing. The children led us in an extraordinary time of praising the Father.  We then were led into a time of prayer by Nelia, a 14 year old girl who lives at the center.  She truly has a calling on her life! 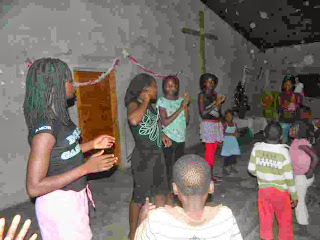 After prayer, the children were invited to come up and share what they are thankful for.  It touched us all to see these orphans come up thanking Father God for their life, joy, and even for school which will start soon.  Many thank Father God for the visitors who came and brought them much happiness.  After the service, we again had a very difficult time getting our team back into the van to come home.  They so love being there and are really connecting with the children.


Today we all were thanking God for the cloud cover that He graciously provided for us. It was still hot, but at least the sun was hidden- at least until lunch time.  Our team arrived at the site, a bit sore and weary from two already strenuous days to face what would be the most difficult day yet.  Today they filled in the gaps along the inside and outside of the wall they had built.  They then brought in wheelbarrows of dirt to raise and level the floor inside the foundation.  Then more cement was mixed and holes were dug for the wall supports.  The wall supports were cemented into the ground. 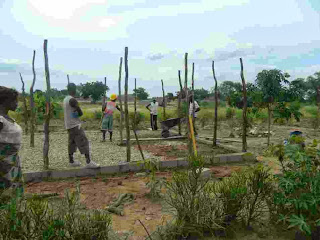 By 1:30 they were all tuckered out and ready to go home when the truck carrying the stone for the foundation arrived.  Grace, Jordan , PJ, and Tyler jumped right up with shovels and hoes to pull it off without even being asked to do so.  The team then worked to fill wheelbarrow load after load with this stone, wheel it to the site, dump it, spread it, and then head back for another load.  Mr. Ryle was an effective encourager as he motivated them to not give up and to do the job and do it well. 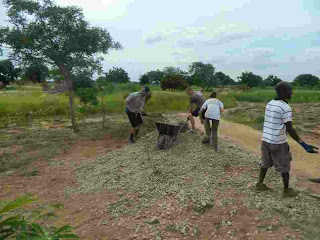 After putting in the longest and hardest day of all, we crawled into the van to head home.
I should add that a highlight of each day has been playing with and getting to know the neighboring children who arrive at the site to watch these strange people work.  At first the children were quite shy.  Some had never seen white people before.  But they quickly warmed up to us. 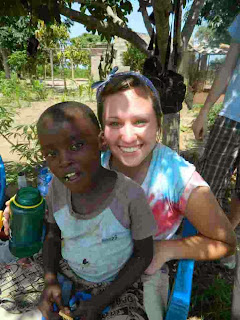 The team has enjoyed playing soccer with the children, teaching them songs, feeding them cookies and pao (Mozambican bread), and holding them.  Mr. Ryle has impressed them with his skill of spinning a soccer ball on his pointer finger and balancing a rake on his forehead. The students also love taking the children’s pictures and then showing them to the children - many of whom have never seen their photo before.  Each day as we leave, they gather around the van and shout “Tchau” as we drive off.
After a shower and spaghetti dinner, we again headed to our favorite place - the Iris Matola Rio center.  Tonight the children treated us to numerous African dances and songs. 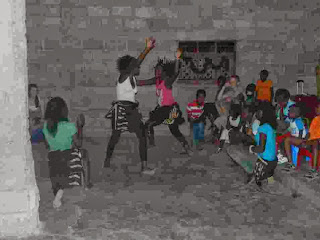 As I looked at the students during the performance, I noticed that every one of them had children in their laps and snuggled up next to them on each side.  The director of the center, Corrie, shared with me that it is not common for a team to form such an instant and strong connection with the children as what has been formed this week.  There truly is a lot of love coming from both sides. 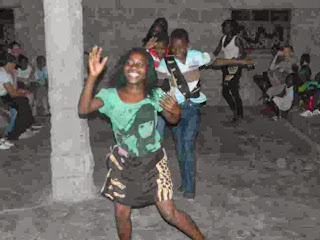 After the performance, Mrs. Castelli was in her glory as she led the children in a song with motions.  The children were then invited to come up in small groups to choose a toy that had been brought by the team.  It was lots of fun to see them choose from the four suitcases full of books, Barbies, cars, balls, etc.  We then were treated to a Mozambican snack of samosas and dumplings and even Coke!  The women who work at the center planned, shopped, and cooked this treat for us with the older girls.  This generous outpouring is very rare and illustrated the impact this team is having on the children’s center.  As we finished our snack, we knew it was time to go judging by the yawning children, teenagers, and adults in the church.  We returned home, and again, everyone has bunked down for the night.
Lord willing, they will sleep well. Tomorrow we finish the floor with a layer of cement- which again will require shoveling, mixing, hauling and spreading in the heat.  Please do pray for continued energy, strength, and supernatural muscle power!
Posted by Terri at 8:02 PM