The Great Wall of Matola Santos

The Great Wall of China was built 2,000 years ago. It took centuries of time to construct. It is estimated that 300,000 soldiers and 500,000 common people labored on this wall, many of whom died during its construction and were buried inside. It is 6,000 kilometers long and it once took a man 2 years to trek the wall from start to finish. It is so immense that you can see it from space.  It is an amazing feat indeed.

We have just completed a wall in Matola Santos. It was built just this past month. It took only 4 weeks to complete with a total of 10 Sunshine Nut Company employees. No one died in the construction of our wall, thank goodness! It is about 30 meters long and you can walk its expanse in a few minutes…well maybe one minute. You cannot see our wall from outer space. No… we did not build a wall as great as the one in China, but for us, it was just as amazing of a feat! 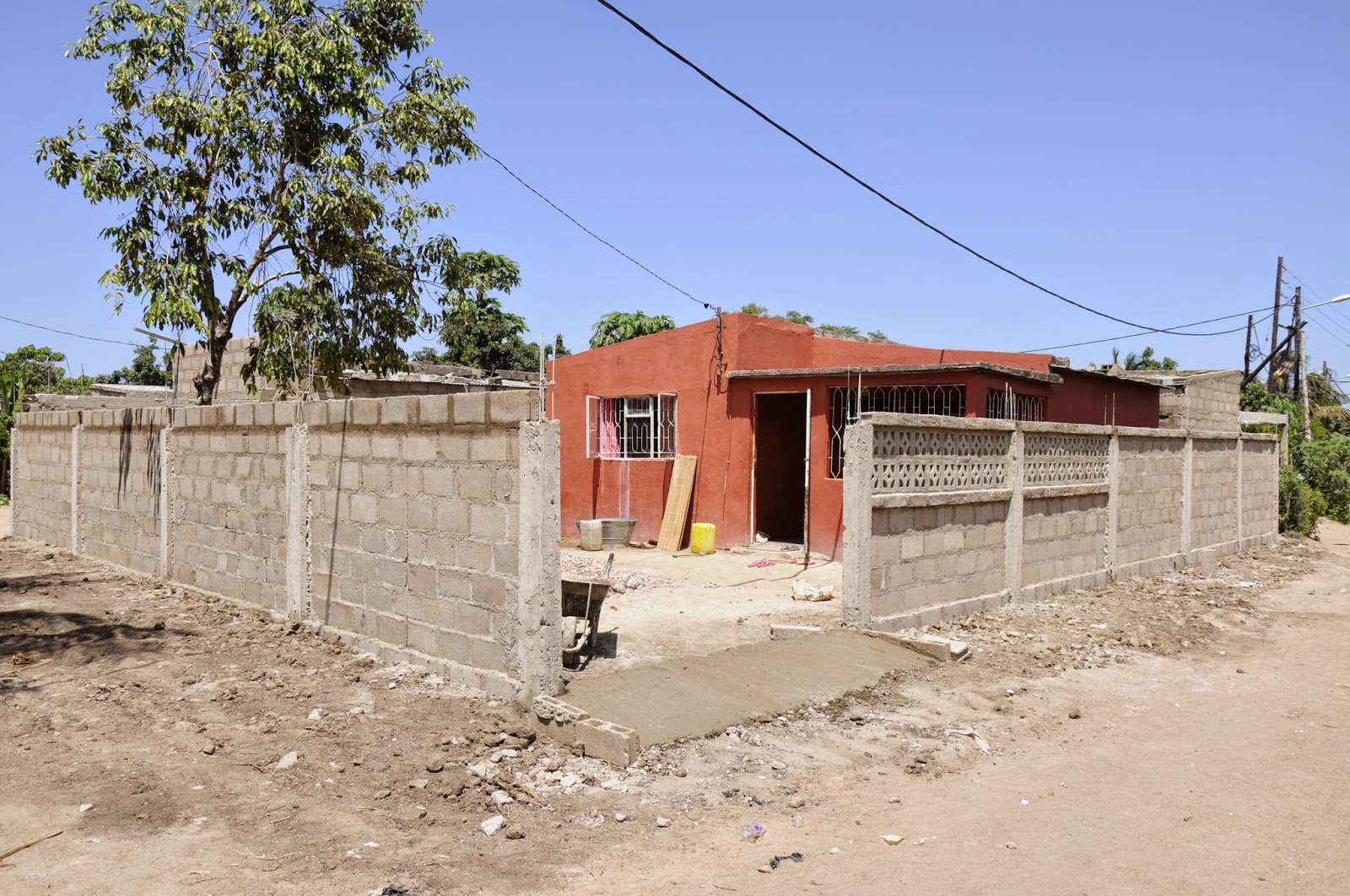 Why was it amazing? Because it was built as a gesture of love to provide security and safety for the family that occupies the first Sunshine House- Cecilia, Madelena, Antonio, and their caretaker, Zelda. Our little family has lived together in their new home for 3 months now. They are learning how to make a life together. Yet their home had no security wall around it, thereby exposing them to robbers, people passing through and using their outside bathroom, men sitting on the stoop along the side facing the road and drinking until 3 in the morning, and simply helping Zelda to keep the little ones, Madelena and Antonio, in the yard and safe while playing.

It is also amazing because of the hearts of the people who labored to complete this wall. We had about 10 of our Sunshine Nut Company employees work over the course of this project. Yet 5 of them  labored tirelessly missing not a single day of work. This in itself was no small feat.  It is summer here in sub-saharan Africa right now. For us in Matola, Mozambique, this means day time temperatures in the 90s to 100 F with a heat index that has been as high as 115 F many times this past month. In fact, it was so hot, that one day I left my gloves out on the pile of sand while I did other things. When I went back later to fetch them to use, the rubber side of my gloves had melted! Laboring under the sun with no shade for four weeks, day in and day out takes determination and stamina. Alberto, Arnaldo, Juliao, Maria, and Aida (along with a worker from the community named Joao) never faltered or complained. In fact, they spent the hours working with discussions on everything from food to the new president of Mozambique to who is older- a man who has more years or a man who has more children- to what the correct word is for “shoelace” in Portuguese (literally a whole morning was spend on that topic! It finally ended after Juliao called his pastor to get the final verdict on the word.) 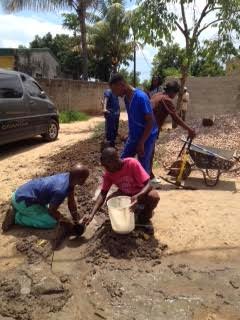 Each day our company provided a nice breakfast and lunch for them. We ate lunch under the shade of a half dead tree, sitting on cement blocks. I joined them and listened as they carried on their conversations, trying to decipher what they were talking about. They use a mix of Portuguese and Shongana. This mix makes it quite a challenge for me.  It was a brief respite from their labor, but they rested and went right back out into the sun again for their final two hours before we quit for the day at 3pm. Our treat each day was a cool Frozy (soft drinks) purchased from the little baraka (store) across the street, owned and operated by Dona Alzira.

We also had the help of various people around us. Of course the first few days as we dug the foundation for the wall, every passerby stopped to give their input on where the wall should go and how deep we should dig the foundation. Even the Cheffe do Quaterao (the local governmental leader) stopped by. At first he wanted the wall on the street side in an even line with the wall of the house across from us. But when we showed him that this would mean putting the wall through the middle of the house, he saw this would not work. Then just to have a say in the matter, he asked us to move it in 10 centimeters. We honored his request and moved it in. 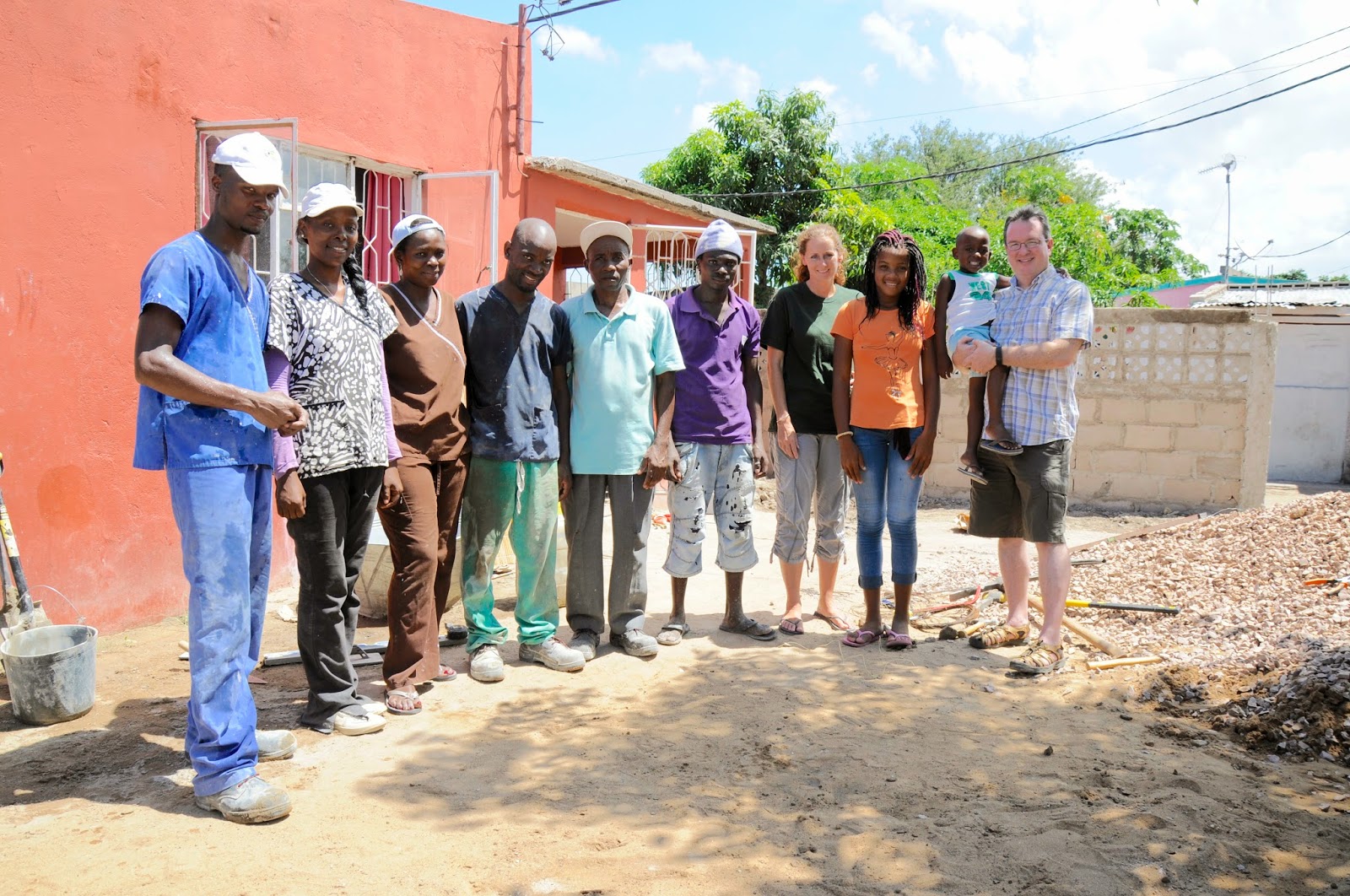 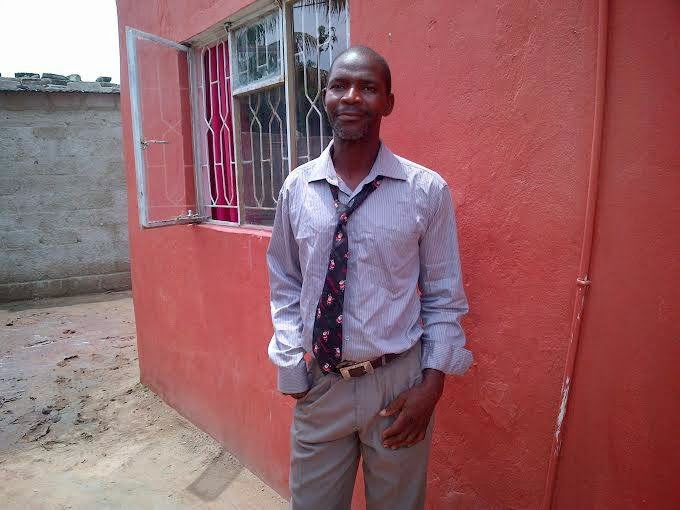 And there was Pedro. He is a local man whose right hand is disabled. He makes a living by collecting people’s garbage each day and taking it to the local dump in his wheelbarrow. He helped us by fetching water for us. We do have the house hooked up for water, but most days the pipes are dry. Here cement is made and mixed by hand- bags of cement are mixed in with sand, rock and water. You cannot make cement if you do not have water.  Without Pedro, we would have been in quite a bind.

Speaking of water, Dona Alzira, the neighbor across the street who sold us our Frozy drinks each 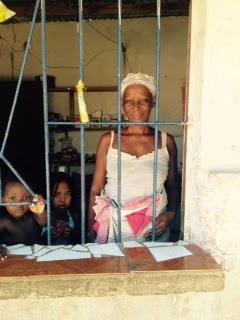 day, was a godsend. Out of the 20 days we were there working on the wall, we probably only had water flowing from our tap about 5 of those days, maybe even less. Dona Alzira permitted us to fill container after container of water from her tap. We would never have been able to complete this project without her generosity.  I still am not sure why she always has water when she just lives across the street from us. TIA- This is Africa! It is full of unexplainable mysteries.

And we owe thanks to our dear 13 year old Cecilia. Each day she went out and bought eggs and bread for the breakfast. She fried up the eggs and heated the water for the tea that our workers enjoyed each morning.  She then cleaned up all the dishes as well before heading off to school. She is a treasure.
Finally, this wall would never have been built without the financial donations of family and friends to our new 501C3 that was formed in this past month named The Sunshine Approach Foundation. Your generosity is making a difference in the lives of others. 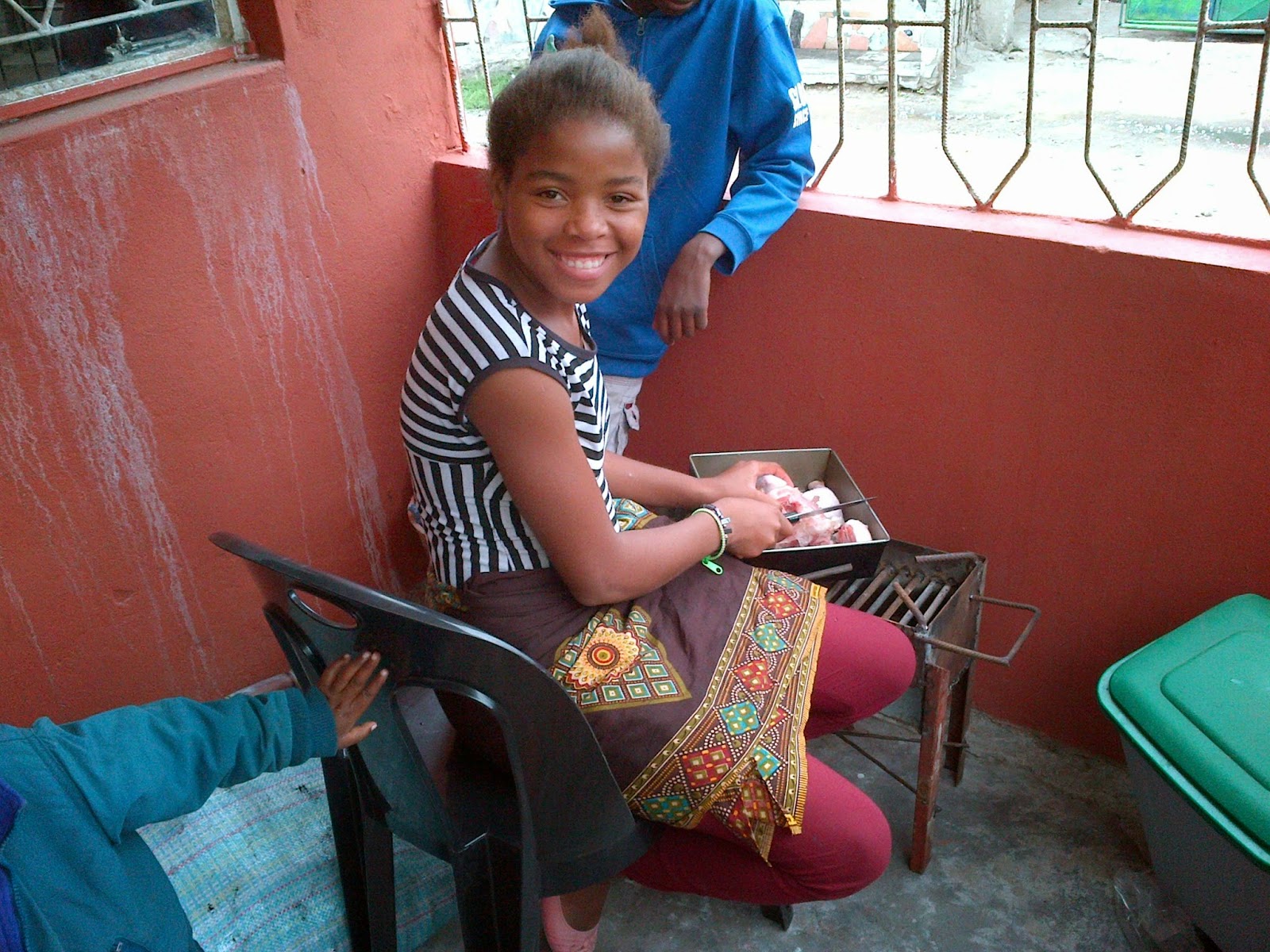 So now our family is secure- playing safely during the day and sleeping soundly at night. As for the guys who sat outside drinking beer each night…I guess they have had to move on to a different hang out.
Posted by Terri at 7:24 AM