The definition of Selfless - my friend Corrie Ockhuysen.

There are two jobs I have always said I will never, ever do no matter how desperate I will ever, ever get. The first job that you will never see me doing is cleaning a public bathroom. No need to explain this any further, so on to the second job you will never catch me in- bus driver. Neither of these people are paid what they are worth or what they deserve. I have now come to add a third job to my list that I will never, ever be employed in- director of a children’s center (or you may call it an orphanage- but out of respect for the fact that every one of these children has a heavenly Father, I prefer not to use that term. They are not orphans at all, but daughters and sons of the Most High King.).

I have gotten to know several directors of children’s centers here. There are no people on this planet for whom I have as much respect as I do for these people. They are completely selfless in their service to the children for which they are responsible. One of these directors humbles me completely in her work. That person is Corrie Ockhuysen, director of the Iris Matola-Rio children’s center, known to some as Project Raphael. When I think of Corrie, I think of the verses in the Bible that speak of dying to self. Corrie is not just "dying to self"; Corrie is "stone cold dead to self". I have never seen her once express a want or a need for herself. Her whole life is lived for others- her children, the people around her center, and her church members. She not only directs the center, she lives there. Therefore, she is on duty 24 hours a day, seven days a week. Her only break is a trip to her native homeland, Holland, once every two years. She has given up all the luxuries that life here on earth has to offer in order to take in and love sick, dying, abandoned, abused, and unloved children back to life. She lives in a small cement home with few possessions to call her own. The only two indulgences I have seen her partake in are a bottle of Coke and a tub of yogurt. She is an example to all who know her of a servant of Jesus. 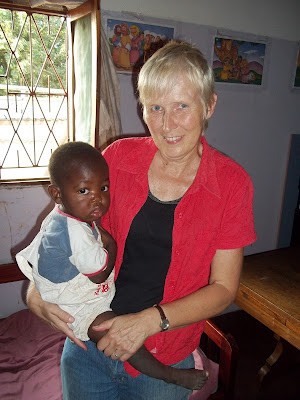 This was the first day I met Corrie (on March 28, 2011) when Don took me to
Africa for the first time.  She was holding one of her new children - Armandinho.
Armandhinho is my favorite.....but I seem to say that about every one of her children. ﻿

On a typical day, one can observe Corrie doing any one of the following:

-taking children to the hospital

-meeting with a school official or teacher regarding her children

-leading a team meeting of her workers

-hosting a visitor and giving a tour of the center

-talking with the educators who work for her

-leading her workers in a weekly praise and worship service

-giving money to a person in need

-giving money to pay for a need at the center

-giving money to a worker

-giving formula to a young mother, or an older mama who is caring for a grandchild

-putting a Band-Aid on a cut

-meeting with the pastor or a member of her church

-constantly being interrupted by the ring of her phone

This list could go on and on, but suffice it to say, Corrie literally oversees every aspect of the running of the center and the care of the children. And as she does these things, she is carrying a child, has a child hanging on her leg, has a child sleeping on her lap, or has a whole brood of them following her around. Her house is usually full of children. They cover her sofa, every chair, and every square inch of her floor. When a guest enters her home, she shushes the children off the furniture to make a place for her guest as she offers them a drink. She then finally takes a seat herself to converse with her guest- but not before the children get shushed right out the door. The both the metal protective gate and the wooden door to her home then must be shut and locked to prevent reentry from the more obstinate children who try to get back in. Often a child or two receives the special privilege of being able to stay inside. Corrie then relaxes in her chair and thoroughly enjoys the time she spends talking and catching up on you. When it is time to leave, it is just hilarious to open the wooden door to her home only to discover the iron gate beyond it is covered with little children that have climbed it and are assembled there like little monkeys. They excitedly call out your name and are so happy to regain entry into Mama Corrie’s home again.

As you can see, Corrie has absolutely no time to herself. For just this reason, she gets my adoration, praise, and appreciation. I watch her and realize, I could not be so selfless and giving each day- or even for a part of the day. While she was home in Holland recently for some much needed rest and relaxation, I had a small taste of what she experiences as I ran children to the medical center for malaria tests, picked up medication for them, and dealt with people asking me for money, baby clothes, baby formula, and even housing. And all the while, I was either holding a child, had one (and usually more than one) hanging on my legs, and was surrounded by a brood of attention starved little ones. It was no picnic, and most days I couldn’t wait to get to the solitude and peace of my home. And I was only at the center for a few hours each day! 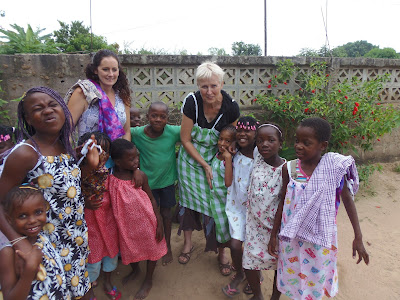 Corrie helping me pass out dresses to her girls.  These dresses were made
by my sister's classroom back in Virginia.
﻿

Yet today I experienced first-hand an additional reason why I could not occupy her position as director. I arrived at the center for the Tuesday morning Praise and Worship time for adults and found Corrie in her home, in her chair, talking with a man I did not recognize who was seated on her sofa with one of the educators at the center named Salima. In between them were two little boys, probably around three and five. I was invited in to take a place in the empty chair. The father had just shown Corrie documents regarding his sons. My suspicion that he was looking to place his two sons at the center was confirmed as I heard more of their continuing conversation. Here before me sat a young father who had recently lost his wife and the mother of his two sons. He now was unable to care for them and maintain his employment as well. His only choice to maintain his existence and theirs was to give them up. He was a neighbor of Salima’s, so she brought them here for help. They had traveled from the north most of the morning by chappa to seek assistance from Corrie. They did not look desperate- they were all healthy, well dressed, and articulate. The youngest son sat on his father’s lap and was talkative, interrupting the conversation for a glass of water and other such things. He kept looking my way, curious about who I was and why I was there. He was a normal little boy, for all appearances. His older brother was quieter and sat sandwiched between his father and Salima. I wondered to myself what must be going through their minds. They had just lost their mother and now they faced living in a children’s center because their father could not care for them. They had to have known what was being discussed, but they showed no signs of the weight of the discussion and the impact it could have on their futures. And the father…what could he have been thinking and feeling…losing his wife and now being forced to send his two sons away. The discussion between Corrie and the father ended. The decision- she had to tell him that she could not take his children and care for them. I know Corrie’s heart for children, and I can only imagine how difficult it was for her to tell them that she could not help them. Her reasons- her center is full, in fact it is overcrowded at the moment. She can only take in the neediest of children- those who are sick, dying, and desperate. These boys were healthy and strong. She had to choose. She offered for them to stay for the praise and worship time that was about to happen. After that, they would get a lunch and she would give them some food to take back home to them. The father did indeed join us for praise and worship- singing and praying along with us while his two sons sat at a nearby table and gobbled down a plate of rice and beans. I left before they did, but as I sit and write this, I can’t help but wonder what they will do to get by. How will this father work and care for his children? Will the children be left to fend for themselves each day until he gets home? Will neighbors or family members step in and help? Or will they be left to tweak out an existence by themselves in this harsh world they live in? Whatever they face, I pray that they will seek God’s provision and that their faith with sustain them. This is exactly the message from the Bible that I shared with those present for the praise and worship today- a message to guard and grow your faith even when faced with trials and challenges. Maybe this was exactly what this father needed to hear today. I pray that it did encourage him, and that Corrie’s kindness to him will encourage him as well.

So you see, I am glad I was quietly sitting in my chair off to the side today. I am glad I did not sit in Corrie’s chair. I am glad I did not have to make this difficult decision. I will continue praying for Corrie as she selflessly serves her children and her church members. Not many of us could do a fraction of what Corrie does each day. One day she will stand before God, and I have no doubt that He will tell her, "Well done, my good and faithful servant. Now enter into your rest." And He will have prepared for her a mansion that will be the quiet, restful place she never had here on earth. It will be a place that someone like her deserves to enjoy for eternity. Maybe He will even throw in a refrigerator full of Cokes and yogurts. And as for me, I may just be charged with cleaning her bathroom!! Which for you, Corrie, I will happily do!