Mango Fruit Flies...they really like to get under your skin...literally. Unfortunately William found out first!

Life in Africa continues to expose us to situations we never imagined experiencing.  This is one we could have been happy without - especially for William.


When we first arrived, we received counsel from some people (mostly ex-pats who were not born and raised here) regarding mango fly eggs. 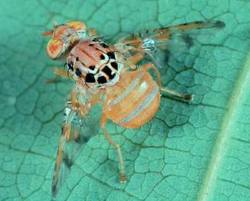 We were told that these flies will lay their eggs on your clothing as it hangs to dry on the line outside.  When you wear the clothes, your body heat enables the eggs to hatch and the worm will embed itself into your skin.  We were told there were two ways to combat this. Option  #1- Dry your clothes in an electric dryer.  The heat will kill the eggs.  The problem with this is that not only are dryers difficult to find to purchase, but they are outrageously expensive.  At this point, we were just not able to afford one.  Option #2- Iron everything you wash.  Ironing is my very least favorite thing in the whole world.  The thought of ironing everything I wash- sheets, towels. shirts, pants, socks, underwear- overwhelms me.  Most people hire an Impregada to do this job.  We again are not able to afford this either.
So we listened to the other group of people (mainly Mozambicans who have lived here all of their life) who said this was silly. They don’t iron their clothes, and they have never had a worm.  They said you just need to not leave your clothes on the line too long, make sure they are in the hot sun, and try not wearing them immediately after taking them in. I was not convinced, but Don reassured me that the first group of people were paranoid and they we had nothing to fear.  (Just to be sure though, I always brought our underwear inside to dry!!)

Well, we should have listened to the first group of people.  Last week, Will had what we thought was an infected bug bite on his left upper arm.  The owner of our home we rent was here with a man who was giving us a quote on putting up an electric fence around our property.  I showed them Will’s arm.  Both immediately agreed that it was not an infected bug bite, but a worm imbedded in his arm.  I exclaimed, “What?”  They said it was a worm.  I again exclaimed, “What?”  And they repeated their answer.  The man, Pete, said all I needed to do was squeeze it out.  Simple, right?  Well, clearly he saw the shock and disgust on my face and offered to show me how to do it. 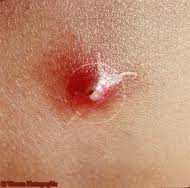 After washing his hands, he began squeezing with his thumb nails on either side of the site.  He did this at least a dozen times as Elizabeth (who has become like a family member to us) held Will tightly as he grimaced in pain.  I must admit, I stood on the other side of the kitchen watching from afar.  Pete was so brave to do this as pus not only seeped out but flew at him.  (Sorry to share this with those of you who are easily sickened by it, but hey- this is Africa!)  After multiple attempts, he squeezed out a small white worm.  Ew, yuck, disgusting!  And then squeezed more to make sure it was all out.  By this time, our brave Will was shaking and cringing, but he held fast and stuck it out.  The area where the worm was had a glaringly red circle about the side of a half-dollar coin and the center was a bloody crater.  Yet we all breathed a sigh of relief that the worm was out and the ordeal was over.  Will’s arm was so sore the rest of the day.  Poor guy could barely even stand to play video games! 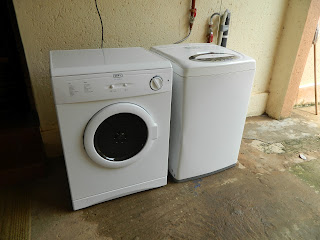 P.S.  There is now a brand-spanking new electric dryer in my house.
Posted by Terri at 3:29 AM