The Dump.....the harshest of circumstances. Can it get worse than this?

Last Friday I joined the team from Iris to go to the Bocaria.  This was my second trip to the Bocaria.  The first time I went, I join a group of Mozambicans to go to the homes in the village beside the dump where we prayed and ministered to people there.  This time, I decided I would join the team that goes  up on top of this large dump.  I thought I was prepared emotionally, yet nothing can prepare one for this experience.  One look showed this was a place of complete desolation and desperation. 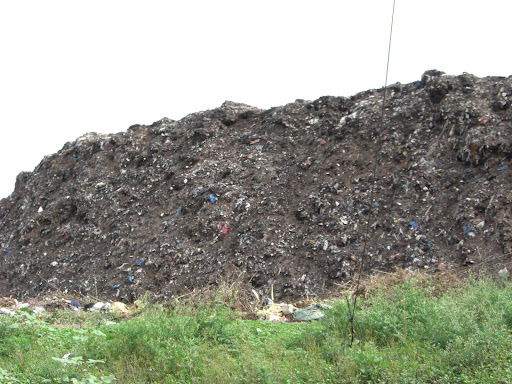 The climb to the top of the dump is steep and long.  I am not sure of the exact height of this dump, but it was at least 3 stories high, if not more.  As I reached the top, I saw before me a vast wasteland that stretched as far as I could see.  Scattered about were people searching through the garbage or sitting on cardboard sifting through their finds.  It was difficult to breathe due to the smell of the rotting garbage and the smoke from the fires that burned throughout the dump.  Flies swarmed everywhere.  During my time there, I did my best to not be bothered by them and swat at them, but there were times when I just couldn't help myself.  Farther beyond us, large dump trucks brought in new loads of garbage and plows were pushing the piles of garbage around as well.  Many people were gathered around this area.  We were invited to only talk with the people who were sitting down as they were resting.  We were asked to not speak with the people who were up because they were working and would not want to be interrupted.
We walked over to a woman sitting on a flattened cardboard box.  Around her were piles of glass bottles, cans, and plastics.  On her cardboard were several bags.  One was a larger tote bag that was filled with food she had found in the garbage.  I was sickened to see a swarm of hundreds of flies around this food, knowing that she and others would eat it later.  As pitiful as her situation may sound to you, I was struck by how beautiful and regal she appeared sitting amidst the garbage.  A young pastor who spoke the local tribal language of Shongun began speaking with her about God.  We were then asked to share anything that God revealed to us for her and he would translate it for the woman.  We all were silent.  I can't speak for the visitors with me, but I know that I was speechless.  Who was I, a privileged white lady, to share anything with her.  Someone finally spoke up and shared a message of God's love for her.  She then was asked how we could pray for her.  She asked for prayer for her unborn child.  We gathered around her to pray.  As we came close, she was clearly embarassed that we all would be able to see the food she had collected in that bag I had mentioned.  She shyly took it and tied it closed.  We laid hands on her and prayed.  She sat peacefully with her eyes closed.  Then she thanked each of us with a warm handshake and smile. We continued on to where an older and younger woman were sorting items.  The young pastor spoke with the older woman and asked for us to share.  I so wanted to share something with her and begged the Lord for a word to bless her.  It was then that my eyes were drawn to the capulana she had tied around her waist. It was decorated in butterflies  (Those of you who know the third grade science curriculum at DC would know how fond we third grade teachers and students are of butterflies!  So it was perfect for me!)  Immediately I recalled the verse from 1 Corinthians 5:17 that tells us that we are a new creation in Christ Jesus.  I spoke up and shared this message with her.  We then prayed for her, and again we were thanked with a warm handshake.  All of this time, the young woman beside her watched and listened. The group moved on without noting her.  Her face was so expressionless.  I had to see her smile.  I had to bless her in some way.  I saw that she had the biggest, most gorgeous, gentle brown eyes.  In the best Portuguese I could muster, I told her that she had beautiful eyes.  I was rewarded with a big, joyful smile, and again, a warm handshake of appreciation.
I caught up to the group.  At this point we were where the dump trucks and plows were.  The dump truck would dump its load and dozens of men, women, and children would hastily climb up on it, dig through it with metal picks, and search out items of value to them.  They reminded me of ants swarming a pile of crumbs. Occasionally, the plow would come through to then plow down the pile.  The plow was followed by more people hoping that something would be turned up in its wake.  The Mozambican pastor who lives and ministers full time at the dump came to talk with us at this point.  He shared that they all had heavy hearts because three of their friends had died this past week.  He did not say what they died of, but as he continued we were able to figure it out.  He shared that the people sometimes get so caught up in their work that they do not pay attention to and listen for the dump trucks and plows.  When this happens, they sometimes get run over.  This is how little their lives are valued.  Apparently, at least one or more of their friends had died this way. 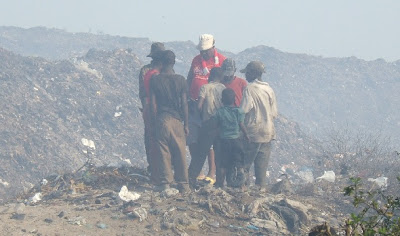