Today I joined the Iris Ministry Team in Zimpeto for their weekly outreach to the Bocaria. The Bocaria is the garbage dump in Maputo. It is enormous both in the land area that it covers as well as its height. It literally is a mountain of rotting, smoking, and stinking garbage. People live there picking out an existence from what is dumped. Here they find their food, their clothing, and search for things they can sell to make money. I went with 4 young women from England who are visiting Iris and 4 Mozambican men and 1 woman. As we drove in, I prayed and prayed that I would find God in this place and that He would reveal His Spirit to the people we would minister to there. I was not as shocked as I thought I would be in this place for the first time. I guess that is because I have been here for a month and am getting used to seeing poverty. What did touch me was the number of children that are there. As we walked to the church where they hold a service, a small village was on our left and a mountain of garbage was to our right. As far as I could see in front of me, there were small children playing and running. And not just a few, but dozens and dozens. I saw very few adults. Only children, There was one man calling out to us from up on the garbage heap, “Give me your bread. I want your bread.” as we walked by. I have been told that most people who live here want food first, and then they will listen. But they will not listen if you do not offer them food. 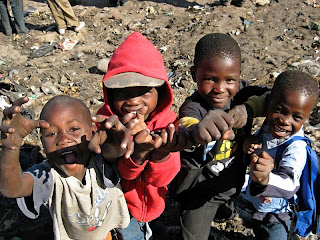 We entered the church building. It was a cement block building with a metal roof. A cement altar was in the front and it was filled with benches for sitting. We were greeted at the door by an elderly woman with a warm hug. I later learned this same woman took the role of overseeing all the children during the service. She sternly patrolled the aisles with a stick, making the children sat up alert and attentive and ensuring they stood to sing and pray. Foolishness and play was not tolerated. There was a clear expectation for behavior and she enforced it. After we entered in, we were swarmed by young children. The children quickly got a position in someone’s arms or lap and those who didn’t get there in time were content to sit next to you or hold your hand. These children’s physical appearance clearly evidenced that they were the poorest of the poor. They wore what was available to them. One little boy wore a cotton pair of shorts with pink flowers on it, the waistband so stretched out that he had to hold them up with his hand. Another little boy (who had gained priority seating on my lap) wore a blue skirt. Their shirts were tattered and torn. Many of them had their shirts on inside out or unbuttoned. Some children wore sweaters or winter jackets despite the warm temperature this day (about 33 degrees Celcius). If they took them off, someone would steal them away. Yet their darling faces beamed with joy and they were a precious site to behold. We sang and prayed together. More elderly women began to arrive, sitting on a mat on the floor in the front of the church. One woman came using crutches. As she reached the door, she laid her crutches on the floor, crawled into the building on her hands and knees, and then stood and used her crutches to walk to the front of the building. There were young girls no more than 12 or 13 with their babies. There were young children no more than 6 or 7 carrying their younger brothers and sisters in capulanas strapped around their backs. The back row was lined with little ones, barely able to walk. They all came here to worship our Father and it was humbling to worship with them. 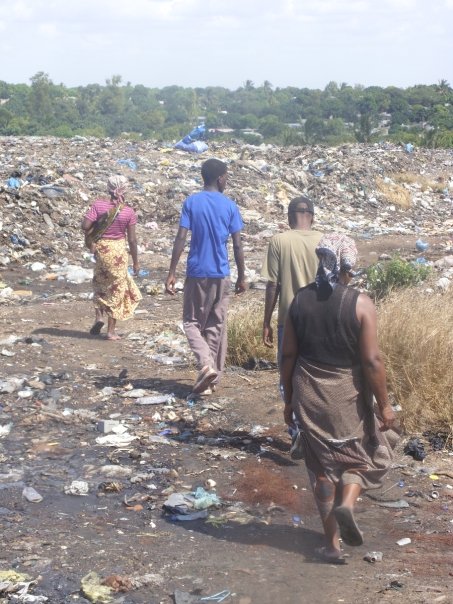 Then it was time to go out and minister to the people. One group of people went up onto the mountain of garbage to pray for people. Having worn flip flops this day, I decided I’d be better off going into the surrounding community to pray for people in their homes. I went with 3 men and 2 women who live there and know the people. We walked through a maze of pathways through this village. Life went on here as it does everywhere else with people tweaking out an existence. Moms were bathing their babies in basins, women were washing and hanging their clothes out to dry, men were working at simple trades in their yards, children played and went to and from school. It was hard to believe they lived bordering a dump.

The first house we went to had a woman who was probably younger than me, yet looked to be decades older. She had fallen and hurt her hip. It also seemed she did not have use of her left arm as she would lift it and move it with her right arm. The team began singing in Portuguese and then broke into prayer. The prayer grew in intensity becoming very loud and forceful. As they prayed this way, we all stood around the room as this woman continued to sit on a mattress leaning against a wall, at times crying uncontrollably. I kept thinking to myself that if Jesus were here, He would crawl right onto that mattress with her, wrap His arms around her, and hold her. I so wanted to do just that, but held back not knowing if that was appropriate and did not want to offend anyone. They finished and began to file out of the home, yet I just had to love on this woman before I could move on. One of the young men stayed behind with me. I knelt at her feet, placed my hands on her outstretched legs and prayed for her. I continued to pray feeling led to cup her sweet, anguished face in my hand, to stroke her arm, and to hold her hand. I just so wanted her to know and feel Father God’s love for her. Through the young man who stayed with me, I shared with her that I felt that I could just see light in her and that God wanted her to know of His heart for her and how much He wanted her heart in return. That He would bring her the healing she needs if she would only give Him her heart. Then I felt released to leave her. I am so glad I stayed to finish this work.
We continued on to another home. A man was sitting on a chair facing the entrance as we entered the yard. He stood as we came in. It was clear he was waiting; he knew he had an appointment- expectantly looking for something or someone to come. He was not well- very thin. We went into his home with him and his sister. Again the team sang. This time, I could sing along as it was very simple. “Abrigado Deus, Alleluia” (Thank you God). You would have had to have been there to experience this singing. The words so simple, yet the way it was sung was exquisite and powerful. One of the young men shared a verse from the bible and a message with the man that God laid on his heart, we prayed over the man and his sister, and it was then time to get back to the church.

When we got back to the church, there were twice as many people, mostly children, as before. The visitors were asked to share their name, place of origin, and a message with the people that was translated. This was followed by at least an hour of singing, a story for the children, and more singing. All along, the elderly grandma patrolled the children keeping them in line. When we were done, the people were dismissed with bread to take home. Outside were many children looking for bread as well. Yet they clearly knew that they must attend the church service to receive the bread. We then walked out to the road to catch our ride back home again.