I have worked roughly 33 years with children as an elementary teacher, as a mother, and now as the Director of Social Impact for our company. I have worked with all kinds of children…those that are easy and bring you great joy, those that are a challenge and try your patience beyond what you thought you were capable of, those that break your heart because of the trials they had to face in life, those to whom everything came easily, and those who had to work hard for everything they achieved. I have been inspired by so many of these children…their resilience, their trust in us adults in their lives, their hope for a better tomorrow, their fortitude, their willingness to try, try, and try again in the face of obstacles. I have worked with children who have overcome great difficulties to become great people. I have also worked with children who have not overcome and have had to continue to struggle as adults. I have seen children grow up to become parents. And I have seen children who have grown up to realize their dreams. Yet none of the children have inspired me as much as a little boy that I only met two days ago. His dear face is before me in my continual thoughts. And I believe it will be for a long, long time to come. 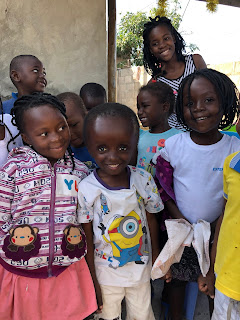 I met Quele only two days ago. I met him at a time when I needed some inspiration. He has given me plenty. I was out walking through the community with Guida, the mom at our second Sunshine House. As we passed a tiny cement block home, she stopped me saying she wanted me to meet a child. And out he came. He was noticeably scared to be brought before a white lady. His eyes showed his discomfort, his head was bowed down, and he chewed nervously on his fingers. He immediately stole my heart and sympathy. In a flash of time, I could only imagine the struggles he has to face, now faces and would forever face in his life. Guida shared with me that she had given his parents an invitation for him to attend her project for the children in her community. Our foundation sponsors a Beacons of Light Community Project at each of our Sunshine Houses. During the day, when our Sunshine Children are off at school, their caretakers run a project for the neediest of the needy children who live around their homes. It is a safe place where these children come to play, sing, dance, hear stories, make crafts, and receive breakfast. Guida said that she could not understand why this little guy’s parents had not yet accepted her invitation and sent him to join her project.

As for me, I could understand completely. It was clear that they sheltered him at home, afraid of what others might say to him that could potentially hurt him. They were only doing what any loving parent would do to protect their child from harm. I told Quele's parents what our project is about- that it is a safe place for children to come to play and have fun…but most importantly, to be loved. I told them that he would be welcome to try it out at any time. Then I crouched down in front of Quele, looked into his fearful eyes, and told him that he would always, always, always be welcome to come and play.

Whatever it was that I said, it must have worked. I arrived at Guida’s project this morning, two days later. I come every Wednesday to share a story and a craft with the children. As I entered the gate, I was swarmed by 15 preschoolers all trying to beat each other out to hug me first. After hugs were given to all, as well as Band-Aids and kisses to the two children who got trampled in the excitement, I saw Quele standing back from the crowd… staring at me… smiling from ear to ear. This was not the same frightened little boy I had met two days ago. This little boy was exuding happiness. He displayed confidence. He was in a place where he was loved and accepted and he knew it! He had stepped out into an unknown and scary situation, and he was fully welcomed!

Today we shared the story of Jonah and the Whale with the children. Quele was totally captivated the entire time my colleague, Delcio, read the story. He could not take his eyes off Delcio. He was literally riveted the entire time. It occurred to me that this was possibly the first time that anyone had ever read him a story! 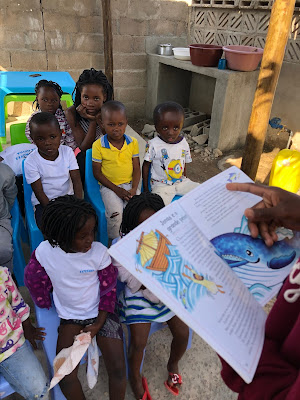 After the story, we made a craft- a plastic paper cup whale that had a string tied to a flour filled balloon with a stick figure Jonah drawn on it. The objective of the game would be to toss Jonah into the air and catch him in the cup/whale. Quele patiently waited his turn to make his craft and was then jubilant when he was able to catch Jonah in the whale. Countless times, I had to turn away to restrain my tears. I was so happy for him. Yet at the same time, my heart broke for him. My mind reeled with the challenges he has already had to face in his 6 years of life, as well as the challenges he has yet to face as he ages into adulthood. The world can be a cruel place, especially for those who are different.

Yet for now, he is with us. We have an opportunity to pour into him, to love him, and to make him know how very special he is. I trust the confidence we can build into him will be enough for him to walk proudly and face whatever challenges he will have to face in life. He has inspired me to see things differently now. That instead of being put off by difficulties, to step out and give it a shot. He had to have been scared beyond belief to go to Guida’s project yesterday. He did not know what would happen when he walked through her gate. He could have been made fun of and laughed back home again. But he took a risk and went in anyway. And it paid off. His risk was rewarded with new friends, new opportunities, and a place to belong.